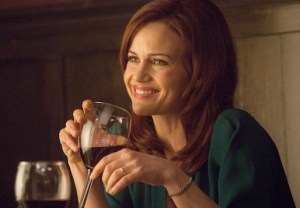 Huuuuge answers will be delivered to fans of Fox’s Wayward Pines — and not in the season finale but this Thursday, midway through the season. Imagine!

From what (whom?) is the electrified perimeter fence protecting the Idaho outpost’s residents? How exactly did Ethan, Theresa and Ben — or Sheriff Pope, for that matter — arrive in the mysterious town? And why does Kate, as dearly departed Beverly also did, believe she has lived there far longer than seems possible?

TVLine spoke with the luminous Carla Gugino, who plays Secret Service agent-turned-toy shop owner Kate, about the big reveals packed into Episode 5 (airing Thursday at 9/8c), a surprising possible alliance and what the thriller’s actual finale might have in store.

TVLINE | We’re previewing this week’s big reveal, when the town’s two big secrets are spelled out. How were those twists first revealed to you?
This episode is the only one my character’s not in, and it’s one of my favorites. It’s so well-structured, and I love the notion that they chose to make the biggest, most epic reveal in the middle of the season. It allows the audience to be in on the information with us and to figure out what we’re going to do about it. To me, as an audience member, that’s an incredibly engaging idea.

TVLINE | Up until then, were you of the mind, “There is nothing that can possibly account for the wide variety of strangeness going on”?
I had a sense of what was going to happen, but specifics were revealed as we continued. What’s so cool about it is, retroactively, it made me want to go back and read all of the scripts that led up to it. All of a sudden, you see how it all adds up, which is always a favorite thing of mine. Like, I perceived a scene one way, but I would have totally perceived it another way if I knew what was actually going on.

TVLINE | Since only the children are officially indoctrinated about the town’s secrets, are Kate and her husband (played by Reed Diamond) wholly oblivious? Or do they know or suspect bits and pieces?
That’s a very tricky question…. Some adults have more information than others.

TVLINE | Kate has toed the “company line” pretty well thus far. On a scale of 1 to 10, how on board with the Wayward Pines rule set would you say she truly is?
I would say looks can be deceiving — so I’ll give you that instead of a number. 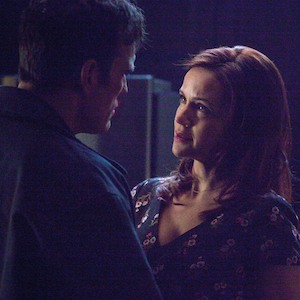 aside from serving to make Theresa and Ben wary of her, what’s the greater storytelling value in establishing that Kate and Ethan had had an affair? Because one could argue it’s almost a superfluous flourish.
One of the things that might not be super obvious, but I think is very important for playing the character, is that Kate has succeeded for as long as she has in Wayward Pines because she’s impeccable at toeing the line and being the citizen that they need her to be. When Ethan shows up…. She probably hasn’t had a feeling that was as intense as she’s had for him since [she arrived there], so when he shows up, he’s probably the only person on the planet she would take the risks she takes to try to save him. That really ends up being a chink in her armor, and that aspect is very important. In addition, these [Kate and Theresa] end up weirdly having more in common than most people, because of this affair.

TVLINE | Might Kate and Theresa ultimately become almost allies, for any reason?
I think women often surprise in these kinds of situations. In this way, what’s definitely nice about Kate and Theresa is that it’s not about “women hating other women.” They are able to go beyond that. I was really adamant about it and [the producers] were really supportive of it. I was like, “I’m not interested in that being the cliche situation,” nor was Shannon [Sossamon] who plays Theresa. For Kate, this is an event she’s looking at that happened 12 years ago; for Theresa, it happened two months ago. So that already is an interesting element. It’s a complex dynamic between them, which I like.

TVLINE | Of the 10, which is your favorite episode and why?
I really love Episode 9. I also really loved 3 and 4, which everyone just finished watching; those were both directed by Zal Batmanglij, who’s super talented and is also the only person who directed two in a row. There’s something about those two that have almost a magic quality to me. But I like the trajectory of the show in general. To me, the show exists more like a long-form film than individual episodes. They’re all interwoven, so it’s almost hard for me to separate episodes out.

TVLINE | Will Episode 10 leave us on any kind of cliffhanger? Are there places to go, if Fox wants a Season 2?
Episode 10 will give you a significant amount of resolution while setting the stage for a possible future of what’s going to happen in this town.

TVLINE | You were just one Entourage movie cameo away from being veritably “everywhere” this month, with HBO’s The Brink (premiering June 21, starring Jack Black and Tim Robbins), San Andreas and all. Is it funny how that oftentimes works out for an actor? “When it rains, it pours”?
It’s crazy because everything I’ve done in the past two years is coming out in a month. So it’s exciting and strange. I’ve done no promotion on anything for several years — I’ve just been working — so it’s funny to be at the point where all of these things are being given to the world. I act because I love it, so the fact that fans are really excited about what I’m in is also exciting to me.