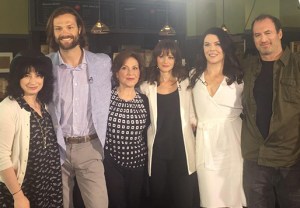 “There’s no way I’m going to top this experience, this cast, these leading ladies here. … And that’s OK. Some people get lucky and some people don’t. And, God, I got so lucky.”

Those words, spoken with grateful exhaustion by Gilmore Girls creator Amy Sherman-Palladino, closed the show’s reunion panel at the ATX Television Festival on Saturday night. What preceded those words was a 90-minute love fest between the cast, the packed theater of adoring fans and the woman responsible for bringing them all together.

It began with an oral history of the show’s beginnings, starting from the fateful trip to Connecticut that inspired the creation of Stars Hollow. “We’re staying at an inn, maybe [Lorelai] works at an inn,” Palladino remembers thinking at the time. “I was desperate.” She even wrote the pilot’s infamous kitchen scene on a piece of the inn’s stationary, which is now “in a box … somewhere you put boxes.”

The core four — Palladino, Lauren Graham, Alexis Bledel and Kelly Bishop — also shared stories from the audition process, including how Palladino thought Bledel hated her, which was actually a quality she found endearing. (“I love her! I love the one who hates me!” Palladino remembers thinking.) It turns out Bledel was merely sick, the result of a recent modeling shoot involving buckets of cold water being hurled at her. (We’ve all been there.)

REMEMBERING EDWARD HERRMANN | There wasn’t a dry eye in the house during the screening of a montage, produced by Palladino, of the late Gilmore patriarch Edward Herrmann’s most memorable scenes, introduced by these touching words from the show’s creator:

It’s really crappy that he’s gone. We miss him so much, and I wanted to put a little something together. I think I speak for all of us: We were so surprised [when he died]. I don’t think any of us knew he was sick. Ed was the first one to say he was going to be at this panel, that’s how f–ed up it is that he’s gone. I just miss him, and I’m so grateful I got to work with him and hear him say my words and see him yell at me at dailies because I was making him do too many takes. … ‘We’re not puppets!’ He was not a puppet. He was just a drinkin’, lovin’, knew-everything-in-the-world [man]. He was our Mr. President. 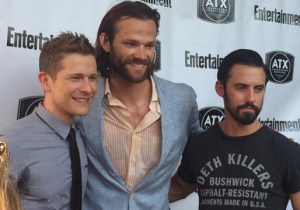 DEAN VS. JESS VS. LOGAN | Following that well-deserved tearjerker, the core four were joined by the rest of Stars Hollow’s finest, which — naturally and immediately — triggered a discussion about the men in Rory’s life.

“I was always a Team Jess guy,” Jared Padalecki revealed. “I love Milo. I think he’s cool and sexy and handsome.” This prompted an answer from Milo Ventimiglia, who tried to play it cool (“I was kind of rooting for everyone”) before conceding, “Logan was a dick.”

Though Matt Czuchry also admitted his character was a dick, he said each suitor had his merits — even if it didn’t seem that way to everyone. “They each brought something out in Rory that she needed at the time,” he said, before revealing he’s also Team Jess.

LUKE AND LORELAI FOREVER? | Fear not, ‘shippers: Luke and Lorelai are still an item to this very day, at least according to Graham. “It didn’t, for me, end in a satisfying way,” she said of the couple’s story at the time of the series finale. “It didn’t really end. It didn’t resolve satisfactorily. … I think they’re together, 100 percent.” In fact, when asked by a young fan whether or not she thinks Luke and Lorelai have since tied the knot, she replied, “I think they probably did.” 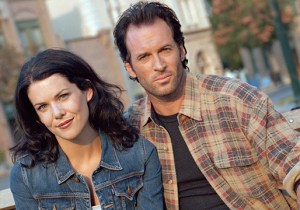 Scott Patterson, meanwhile, has given quite a bit more thought to his character’s current whereabouts. “For me, there’s two scenarios,” he began when asked about the show’s “it” couple. “Luke either stayed in town … or he closed [his diner] down and moved to a lake 40 miles outside of town. He reopened Luke’s Diner [there] and it’s a bait and tackle shop. He sells camping gear, as well.”

After allowing Patterson to ramble for a bit, Graham pointedly interjected, “Does he have a girlfriend?” to which he added that Lorelai would likely have Luke give her fishing lessons — fly fishing, if you’re a stickler for specifics.

WHAT ABOUT EVERYBODY ELSE? | The where-are-they-now question was posed to the rest of the actors, who came up with a mixed bag of answers, some of which had clearly been percolating since the series ended in 2007. Here are some of our favorite responses:

* Bishop said she can’t imagine what her character’s life would be like without Richard in it. “Emily’s a widow, so that’s a whole other world,” she acknowledged. “I don’t know where she is.”

* Czuchry said he only knows that trust-fund baby Logan “would not be working.”

* Padalecki seemed convinced that Dean “would have worked long and hard at Doose’s Market,” eventually turning it into Dean’s Market.

* Ventimiglia said he’s sure Jess is “just being Jess, walking away when too many people show up.”

* “Lane is figuring out what kind of mom she wants to be,” Keiko Agena mused. “She wants to be Lorelai, but I think in her heart, she’s a little Mrs. Kim. … I hope she’s still playing music with Hep Alien.” (Oh, did we forget to mention Hep Alien also put on a reunion show Friday? Check out out below.)

* Liz Torres, bless her heart, rambled something mostly incoherent about how she always thought Ms. Patty would end up with Luke because “women fall in love with cold and withholding men,” before suggesting that her character is now the clueless mayor of Stars Hollow.

* Both Liza Weil and Danny Strong said they think Paris and Doyle are still together. After referring to the couple as “ride or die all the way,” Weil said she hopes they’re “supporting each other and taking over the f–ing world, man.” Professionally speaking, Strong said Doyle is likely “a reporter working for a website, probably thinking everyone he was working for was an idiot.”

GILMORE GIRLS: THE MOVIE? | It wouldn’t have been a reunion without Palladino and the cast being asked whether a full-blown reunion movie could be in the works — a theory recently fueled by Patterson’s quote to the Gilmore Guys podcast that “there are talks” about a project happening. So… is it? (You can read all about that right here.)

FOUR LITTLE WORDS | Lastly, it sounds like those elusive final four words — the ones with which Palladino initially planned to end the series — will remain elusive for the time being. In addition to echoing her sentiments from earlier in the day, the ones about her withholding them for the sake of “being an a–hole,” Palladino said she probably won’t reveal them until she’s on her death bed.

More specifically, she said, “On my death bed, Mike Ausiello will be over my face and he won’t let me go until I say those last four words.” (I probably shouldn’t speak for TVLine’s editor-in-chief, but I could totally see that prophecy coming to fruition.)

Gilmore Nation, your thoughts on this long-awaited reunion? Do you want to see a reunion movie? Any guess about those final four words? And, seriously, are you Team Jess, Dean or *shudder* Logan? Drop a comment with all of your thoughts below.