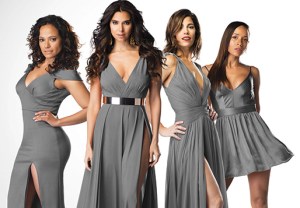 Monday’s Devious Maids premiere picked up right where Season 2 left off, with Rosie and Spence’s nuptials being cut short by the sound of gunshots. So… who ended up in Ty’s line of fire?

It turns out there were three direct hits: Rosie, Pablo and an unidentified man of the cloth — but only one of their injuries proved fatal. In that spirit (unfortunate pun intended), let’s begin with the question I’m sure is on everyone’s mind: Why Pablo?!

“You don’t want to do any harm to a character, especially kill them, unless it’s going to be worth something great to you in storytelling,” executive producer Sabrina Wind explains. “We thought that for Zoila to be pregnant with a man’s baby whom she could not possibly be with, and to be in love with another man, just made for the most gut-wrenching and interesting storytelling.”

Below, TVLine breaks down the Season 3 premiere’s biggest moments, peppered with additional scoop from Wind to hold you over until next week’s (hopefully less fatal) episode.

WHO’S THE DADDY? | Speaking of Pablo, Zoila learned that he is the father of her unborn child, a fact she chose not to share with Javier upon informing him of her pregnancy. And don’t expect Zoila to fess up anytime soon! “I won’t say [the secret lasts] all season, but she definitely wrestles with it until she eventually decides to take action,” Wind teases. “Generally speaking, becoming pregnant really changes her perspective on a lot of things.”

SPENCE VS. ERNESTO | After waking from a four-month coma — a plot twist that only Devious Maids could get away with — Rosie discovered that Spence had launched a porn career while she was asleep. (¡Escandalo!) And with Rosie’s not-dead husband Ernesto soon returning to the picture, Wind says the couple’s happily-ever-after might have to be put on hold: “The greatest love triangles are the ones where you don’t know who to root for, and this has the makings of one of those,” she promises. “Cristián de la Fuente is maybe one of the hottest men I’ve ever seen, and as much as I root for Grant [Show], you see Ernesto and you think, ‘He’s just so hot!'”

SHADY KATIE | And what of the Stappords’ new “daughter”? The one who may or may not — probably not — be from Argentina? Wind can’t reveal the aftermath of the premiere’s final bloody moment, but she does acknowledge that Katie is “an important part of the storytelling in Season 3.” And her odd behavior doesn’t go unnoticed for long; there’s a scene in Episode 6 when Marisol, in a “somewhat drunken state,” says something to the effect of, “I don’t normally talk badly about children, but that girl is creepy!”

CAN’T BUY ME LOVE | After learning that Sebastian isn’t quite as successful as he appeared — and that he didn’t actually rent her that house — Carmen attempted to kick her married boyfriend to the curb. But that situation is far from over, and it’s only a matter of time before Carmen is forced to come face-to-face with his wife. “If and when it may happen, it’ll be just as amazingly funny and terrible as you’re probably imagining,” Wind says.

ACE OF MACE | Despite Valentina accidentally macing Remy during an over-protective jog, the couple appears to be sailing smoothly into Season 3. But this is Devious Maids, and we already know Edy Ganem is only appearing part-time this year, so it’s safe to say something big is on the way. “She has something life-changing happen to her, and she follows that journey,” Wind previews. “But she’s never going to be gone permanently from our universe. We love her too much.”

Your thoughts on the season premiere’s many twists? Grade the episode below, then drop ’em in a comment.