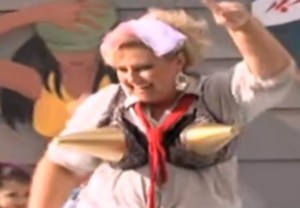 One of the families featured on CBS’ new reality series The Briefcase — which dangles a “life-altering” sum of money in front of those “experiencing financial setbacks” — previously was featured on a TLC series about extravagant kiddie parties.

As pointed out by TVLine reader Helen (and seen in the video below), the Bergin family of Matthews, N.C., threw an ’80s-themed party for their three daughters back in 2011, spending at least $7,750 on flourishes such as an outdoor roller rink, a foam pool and cheerleaders. (The girls’ mom, Kim, is described in the TLC video as a “part-time event planner.”)

Based on the timeline established on The Briefcase, this party was held six years after family patriarch Joe was laid off from a sales job at age 40, at which time he launched an ice cream truck business to hopefully make ends meet.

In the months before being cast on The Briefcase — where the Bergins were seen inhabiting a more modest home than in the TLC episode — Joe was injured in a vehicular collision, leaving him “unable to work, at all,” he said during the program.

CBS did not immediately respond to TVLine’s request for comment on The Briefcase‘s vetting process.

At the close of their Briefcase episode, the Bergin and Bronson families wound up giving to one another the full $100,000 inside their respective briefcase.

The Briefcase opened on Wednesday as the night’s most watched program, with 6.87 million total viewers (per Nielsen finals), and placed a close second in the demo (behind Fox’s MasterChef). TVLine readers gave the premiere an average grade of “D.”