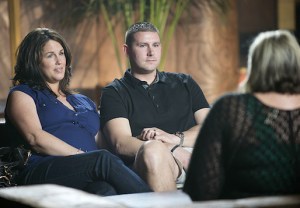 And to think you laughed at my comparison to The Dark Knight‘s ferry boats.

CBS on Wednesday opened The Briefcase, a new short-run reality series in which two needy families are each given $100,000 cash and then tasked with giving all, some or none of it to a second deserving family.

The “twist” here is that unbeknownst to either party, the second family also was handed a cash-filled briefcase and the same dilemma.

In the premiere, we met the Bronsons: Dave, a war vet with a prosthetic leg, and his wife Cara, who are expecting their second child this summer. Among their challenges is a (modest) new home construction which has seen its cost rise with every special need dictated by Dave’s mobility.

The other family, the Bergins, include Joe, a long-ago laid-off executive whose ice cream truck business is struggling, and his wife Kim — neither of whom have been able to afford health insurance for a couple of years.

Throughout the hour, each couple pondered extremes — keeping all of the windfall (in the spirit of “protect your own family first”) or altruistically parting with all of the cash. In what was meant to be a final emotional thrust, each family visited the other’s (vacant) house, to see “how they lived,” but aside from the discovery of Dave’s spare legs, the sequence came across as, well, sorta-creepy snooping. Ooh, unpaid medical bills!

In the end, the couples were invited to meet at Los Angeles Union Station, where they 1) realized they each had been given a briefcase and 2) then revealed how much they decided to give each other. In this first scenario, each family ceded the entire sum, meaning they each walked away with 100 grand. So, all of that internal struggle/moral deliberation was perhaps enlightening, but ultimately for naught.

And as that outcome became evident, you had to wonder: If the show is playing its cards right, is that the only result we should be “OK” with witnessing? Because while a lopsided outcome would provide “entertainment” in its awkwardness — “Er, yeah, so…. Here’s $5,000. This was nice” — wouldn’t it leave us with a yucky feeling? And is CBS, the same network which endeavored to never make Undercover Boss about slackers getting canned, in the business of producing not-so-happy endings?

Or will one of the five other upcoming (and already-cast!) match-ups stack the deck in one family’s favor, for both those involved and us the audience?

What did you think of The Briefcase‘s opening? And what has made the animals so angry in all of the Zoo promos??