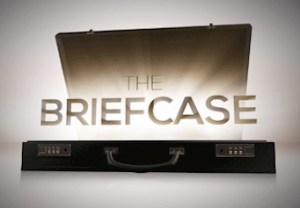 CBS this summer will invite a dozen families to open The Briefcase and then decide what to do with its contents — $101,000.

The six-week series, debuting Wednesday, May 27 at 8/7c, presents hard-working American families experiencing financial setbacks with a briefcase containing not just the aforementioned sum but with it a potentially life-altering decision: they can keep all of the money for themselves, or give all or part of it to another family in need.

The twist: Unbeknownst to either party, the “other family in need” has also received a briefcase loaded with $101K, and has 72 hours to assess the other brood’s burden and decide how much if any of their windfall they will part with.

It’s kinda like the ferry boat conundrum in The Dark Knight. At least, that’s how I’m picturing it.

“The Briefcase is an eye-opening look into what matters most in people’s lives, taking the audience on an emotional roller coaster ride with a shocking ending each week,” series creator Dave Broome said in a statement. “I’ve been incredibly impressed by just how generous Americans are, even with shrinking paychecks and rising debt, when there’s little left to give.”

The families and their stories are as follows:
The Bergins of Matthews, N.C.: After Joe was laid off from his corporate job 10 years ago, he and his wife, Kim, started an ice cream truck business which is struggling.
The Bronsons of Manchester, N.H.: Dave is an American hero whose Humvee exploded when he was in Iraq and he lost his leg. He and his wife, Cara, are expecting their second child this summer. Living on one income with a growing family has put a significant amount of stress on the Bronsons.
The Wylies of Rio Vista, Texas: After suffering a bad back injury almost 20 years ago and losing his well-paying job in the steel industry, Matt now works as the local constable. Becky and Matt admit that their financial situation has made life difficult, but they believe strongly in community service and rely heavily on their Christian faith to guide them.
The Baileys of Dorchester, Mass.: Three years ago, Tonya and Leila took in Leila’s nephews, Milton and Jaden, and today the children are thriving. Taking on the responsibility of two children comes with added costs and they have put their dream of having a child of their own on hold.
The Scotts of Mechanicsville, Md.: Josh and Susan hope to expand their family and adopt a child, but living paycheck to paycheck has made it difficult to make their dream come true. With their large amount of debt and the hefty price of adoption, they fear that it may never become reality.
The Musolinos of Fuqua Varina, N.C.: John and Amanda were living the American dream until they lost their business and were forced to sell their house. With the family based in North Carolina and John’s fishing job in Florida, the family spends more than half the year apart, straining their relationship.
The Matas of Boyle Heights, Calif.: The Matas are extremely passionate about their Mexican heritage, and they all perform together in a Mariachi band on the weekends. In addition to playing, they run a Mariachi conservatory to teach youth the art in hopes of keeping them off the streets of Los Angeles. Their value of education has driven them into large debt with student loans, and as teachers they often find themselves spending their own money on supplies.
The Melansons of Hingham, Mass.: Living on one income with four children is a challenge financially for Mark and Cara, but over the past six years they’ve managed to foster multiple children. Their eldest son started the charity “Guys with Pies” that has raised more than $30,000, and Cara is going back to school to become a lawyer so she can help advocate for foster children.
The Moyas of Albuquerque: Gabe and Krystal Moya are high school sweethearts whose lives revolve around faith and family. The Moya’s finances hit rock bottom in 2009, but through all the hard times, they remain positive, feel blessed, and are determined to raise their children with strong faith.
The Vendely/Salgado family of Miami: Amari and Natalie’s financial situation hit a rough patch when Natalie was laid off from her position as a medical assistant. She has since found another job, but the time unemployed in-between jobs took a toll on the family. In addition there will be extra expenses for Amari’s transition. He was born female, but after giving birth to two children and living as a woman for most of her adult life, he now lives as a man.
The Aponte/Kassimatis family of Union Beach, N.J.: Mike and Andrea have been together for nine years. In 2009, they invested in a house, but shortly after completing the renovations, Hurricane Sandy hit the New Jersey coast and destroyed what they had built.
The Owenses of Dayton, Ohio: Robert and Lucy place high importance on education within their family. Robert is an educational consultant with a master’s degree from Wright University and working on his doctorate. Lucy is a special programs coordinator at Wright University. With large student loans and trying to pay for their children’s education, they have a hard time staying afloat financially.

What do you think of The Briefcase‘s premise, and might you tune in?