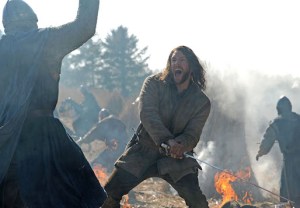 Per the official description, the 10-episode period piece “tells the story of a warrior knight in King Edward I’s charge who is broken by the ravages of war and vows to lay down his sword. But when that violence finds him again he is forced to pick up the bloodiest sword of all.”

The cast includes Stephen Moyer (True Blood) as the “street-smart and noble” Milus Corbett, Katey Sagal (Sons of Anarchy) as mystical seer Annora of the Alders, Matthew Rhys (The Americans) as the leader of a Welsh rebel group and Aussie newcomer Lee Jones as Wilkin Brattle — aka the titular role.

Sutter, who is Sagal’s real-life husband and will play Annora’s seldom-speaking mate/guardian The Dark Mute, will executive-produce alongside his SOA partner Paris Barclay — who also directed the pilot — and Imagine Television.

Production of the series will resume this summer; The Bastard Executioner is slated to premiere this fall.