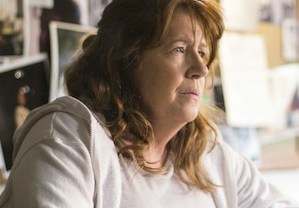 Leftovers‘ standout Ann Dowd is staying in the HBO family with a multi-episode arc on Cinemax’s new drama Quarry, TVLine has learned exclusively.

The series, based loosely on a series of books by Max Allen Collins, centers on the titular Marine marksman (played by Prometheus‘ Logan Marshall-Green) who returns home from Vietnam in 1972 only to find himself shunned and demonized. Disillusioned, the vet is quickly recruited into a network of contract killers and corruption along the Mississippi River.

Dowd will play loving, accepting southern momma Naomi — a big-hearted woman whose favorite pastimes are smoking, drinking, gambling and doting on her best friend and only son, Buddy (Justified‘s Damon Herriman), despite his unconventional and illicit lifestyle.

In other Dowd news, fans of her Leftovers character, late Guilty Remnant leader Patti, will be heartened to learn that we may not have seen the last of the cranky creeper. There’s buzz that she may turn up in Season 2 in some capacity (something series co-creator Damon Lindelof essentially confirmed to us last fall).

Rectify scribes Michael D. Fuller and Graham Gordy created Quarry, and will serve as EPs alongside Banshee‘s Greg Yaitanes (who is directing the entire first season).