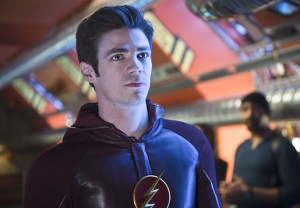 The CW’s The Flash wrapped its freshman “run” on Tuesday with a timey-wimey, scientific jargon-filled episode in which Barry was presented with the opportunity to go back to the past and save his mother — but at what cost?

With Wells/Eobard imprisoned in the Pipeline, Barry got some quality face time with the man also known as Reverse-Flash. Flash’s foe explained that he hates Barry — years from now, for reasons that aren’t important at this time. But in explaining the role he played in the Allens’ dark past, in what was a bid to derail Barry’s speedster destiny, Eobard tempts Barry with the opportunity to change things, to use the particle accelerator to open up a stable-ish wormhole through which he can access the past and save his mother.

Barry grapples with that dilemma and the paradoxes it poses, hearing all sides of the argument from Stein, Joe, Caitlin, Iris, his father Henry…. Because to tinker with the past and thus grow up with both parents could vastly affect the decades that followed, meaning he wouldn’t grow up with the Wests, he might not ever meet the S.T.A.R. Labs team.

Ultimately, thanks to a nudge from both Iris and Joe — and after seeing ordained rabbi Dr. Stein wed Caitlin and Ronnie — Barry decides to go for it, and once inside the refurbished particle accelerator reaches the speed necessary to collide with a hydrogen proton and thus trigger the wormhole. (Along the way to Mach 2+, Barry glimpses his past and future 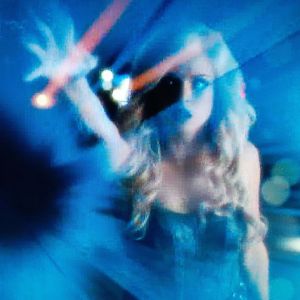 — including Caitlin’s coooool alter ego, at right.) He then has 1 minute, 52 seconds to save his mom and get out before the wormhole closes. Eobard meanwhile will use a time sphere constructed by Cisco (who it turns out was affected by the PA explosion and can see the “vibrations” in the universe/into alt timelines) and Ronnie to get back “home,” but not before Jay Garrick’s Flash helmet comes clanging out of the wormhole, Eobard’s “cue” to get going.

Once Barry is in the past, in his childhood home on that night, he is warded off by his future, white logo-emblazened self and elects not to save his mother. He does though get to see her, introduce himself and assure her that he and his dad will be OK in the future, after her death.

Barry then zooms back to the present, bursting out of the wormhole to KO Eobard before he can escape in the time sphere. The Flashes then slug it out, to the point that Reverse is ready to go for the kill when a gunshot rings out, waylaying him. It’s Eddie, who has decided to matter after all, to be the hero to Iris that he always wanted to be, by killing himself and thus compromising great-great-great-great-great-grandson Eobard’s fate. And indeed, Eobard dissolves away, slowly erased from existence.

But then, the very worst that could happen happens, as the wormhole reopens, highly unstable and evolving into a singularity/black hole — one that won’t stop absorbing matter even once it consumes Earth itself. Assessing it simplistically as an upside-town tornado, Barry decides he must at least try to unwind the twister, and sets off to do so, speeding up the side of a collapsing skyscraper and into the vortex of the beast, as everyone (including Captain Cold and Hawkgirl) looks on… and then the season fades to black.