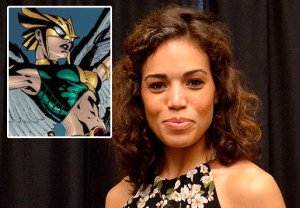 The potential CW series, which will feature characters from both series, has cast the Pippin actress as Kendra Saunders, a woman who has recently learned that she’s been reincarnated many times. Make her angry, and she reverts to her ancient warrior persona… and sprouts wings out of her back. (Hence, Hawkgirl.)

PHOTOS Supergirl Vs. Wonder Woman, Black Canary and More: Which Crimefighting Costume Is Most Super?

Reneé’s Hawkgirl is likely not one of the “mystery” characters to which the production has alluded; those characters are said never to have been seen on screen before, and Hawkgirl (then played by Sahar Biniaz) appeared on Smallville.

Renée also appeared in the Broadway production Big Fish and on an episode of Law & Order: SVU.

Thoughts on the casting? Sound off in the comments!