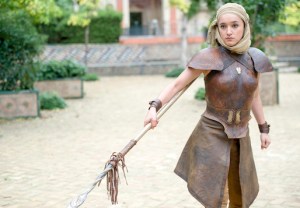 Oberyn, your daughters do you proud.

In this week’s Game of Thrones, not five minutes after Jaime and Bronn sneak into the Martell family compound, the Sand Snakes have them on the defensive (and kinda losing). The women are, as the episode title says, “Unbowed, Unbent, Unbroken” — and, I’d add, hella badass. The Red Viper’s babies are all grown up and ready to get their vengeance on.

Elsewhere, Sansa is wed (boo), Arya is dumbfounded (cool) and Tyrion talks his way out of yet another predicament (obviously). Read on for what happens in this week’s episode.

HOUSE STARK | We open on Arya washing corpses in the House of Black and White and wondering what happens to the bodies after she’s done with them. She gets no answers, but she does get a nighttime visit from Jaqen H’ghar, who repeatedly strikes her for telling her story. “A girl lies to me, to the Many-Faced God,” he says. And when she says she doesn’t want to play the game any longer, he ominously replies as if he’s talking about 1993 me and Tetris: “We never stop playing.”

While scrubbing the floor, Arya meets a father whose daughter is so ill and in so much pain that he only wants to end her suffering. Arya comforts the girl, spinning a tale about how she’d been sick and dying once but her father brought her to the house. “I drank the water from this fountain. It healed me,” Arya lies, dipping a cup into the depths and placing it to the girl’s lips. Jaqen watches the scene from the hall, and later, as Arya is cleaning the girl’s body, he bids her to follow him to a previously off-limits area of the house.

What’s down there? Heads. Lots of heads, shelved reverently and lit by candles. “A girl is not ready to become no one, but she’s ready to become someone else,” Jaqen intones as Arya strokes one of the body-less faces.

HOUSE STARK: AGAIN? EDITION | Far away at Winterfell, Ramsay sends Miranda to bathe Sansa before the wedding. Is that here already? Time flies when you’re doomed to a terrible life that only gets worse every single episode. She fills Lady Stark’s head with stories about Ramsay’s other women, all of whom have met terrible ends (including that one she and Ramsay were hunting with the dogs last season), but Sansa doesn’t frighten easily — and lets her know it.

Theon arrives to escort Sansa to the godswood for the ceremony, but she won’t take his arm, even though Theon says Ramsay will punish him if she doesn’t. “You think I care what he does to you?” she spits. They trudge out into the snow, where Sansa and Ramsay are wed in the coldest ceremony ever (and I mean that in every sense of the word).

Later, their first night together is made even more terrible by the presence of Theon, whom Ramsay commands to stay. “You stay here, Reek. You watch,” Bolton says. Sansa looks like she’d rather burn her eyeballs out with one of the nearby candles, and Theon is crying as Ramsay rips her dress down the back and has his way with her. Good God, between this and Outlander, I think I’ve had enough non-consensual creepy, messed-up sex stuff for the week. Thanks, premium cable.

HOUSE MORMONT | Jorah’s greyscale spot is still there, but Tyrion still doesn’t know about it. Their ongoing conversation covers many topics, including fathers: Tyrion admits to killing his, then says he met Jorah’s before he died. The look on Jorah’s face is heartbreaking. “You didn’t know,” Tyrion realizes, apologizing for delivering the news so bluntly. He relays what he heard about the death: that while leading an expedition beyond The Wall, there was a mutiny, and Lord Commander Mormont was killed by his own men.

As Jorah and Tyrion walk (side note: how gorgeous is the shot where they’re trekking through the fields near the ocean?), Jorah says he believes Daenerys is the real deal because of the whole she-didn’t-die-when-consumed-by-flame thing. Plus, “She’s the rightful heir.” Tyrion makes some valid points about how her father was an insane tyrant who burned people alive, but the conversation is cut short when they’re captured by slavers. There’s a lot of talk about how the captors are going to cut off Tyrion’s junk and sell it, but — as always — the youngest Lannister talks his way out of immediate danger. How will anyone know his nether regions actually came from a little person, he asks? “It will be a dwarf-sized c—k,” one of the men says. “Guess again,” Tyrion says. (Ha!) In another fancy bit of arguing, Tyrion buys them more time by talking up Jorah as a mighty fighter who could earn the slaver a lot of cash in the recently re-opened fighting pits. “Take me to Slaver’s Bay, put a sword in my hand, I’ll prove my worth,” the older man promises.

HOUSE LANNISTER | When Littlefinger returns to King’s Landing, he wastes no time in letting Cersei know that Sansa is living under Roose Bolton’s roof in the north. (Why am I ever surprised at how little he cares about anyone but himself?) She’s quite angry, but he counsels that she allow him to manage the situation… and eventually he’ll become Warden of the North.

HOUSE MARTELL | In Dorne, Trystane Martell and Myrcella Lannister are quite hot for each other. “They have no idea how dangerous that is,” Prince Doran notes, vowing to protect them.

Meanwhile, Jaime and Bronn, dressed in the clothes of the men they killed, head to the Martell family home Sunspear and sneak in. Jaime has no plan — “I like to improvise,” he tells Bronn, who replies, “That explains the golden hand.” (Heh.) Which is part of the reason they wind up fighting the Sand Snakes in the Water Gardens. (Small confession: I studied in Seville, Spain, and spent many hours in the Real Alcázar where the fight scene was shot. So part of the time that the Sand Snakes are fighting for their father’s honor, I am a wee bit distracted by my nostalgia for the mosaic work and orange trees.) Eventually, the Martell guards surround them, and Bronn and Jaime surrender their weapons.

HOUSE TYRELL | Grandma Tyrell is back in King’s Landing, and all is right in the world. She’s there to help free Loras, and she has no patience for Cersei’s ridiculousness. She calls Cersei a “tart” and then makes a “come at me, ho” face, then demands that her grandson be freed. There are a lot of threats thrown back and forth, but the Queen Mother refuses to budge.

At a “trial” to determine Loras’ guilt or innocence, the High Sparrow holds the knight’s affection for Renly against him. Loras lies and says that he’s never lain with a man, then the faith calls Margaery to the stand. “I am the queen,” she says, incredulous. High Sparrow don’t care. So she testifies and says that Loras is as straight as a sword. But then the High Sparrow brings in Ollie, the blonde who was in bed with Loras when Margaery walked into the bedroom a few episodes back, it’s all over. The High Sparrow calls for a formal trial against Loras… and Margaery.