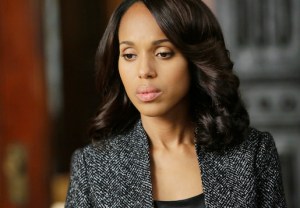 “It’s everybody against each other,” big bad Scandal dad Joe Morton warned us of Thursday’s Season 4 finale — and indeed it was.

So once the dust settled, who emerged victorious, and who sustained devastating blows?

Picking up where last week last off, Mellie took a meeting with a deep-pocketed potential booster — “Damascus Bainbridge” (aka Rowan). But when he goes to run some “causes” by her, his agenda becomes clear: He’s got dirt on both Fitz (Remington!) and the would-be senator herself (Andrew!). In trade for keeping a lid on it all, he asks for one thing: With Jake finally testifying about B613’s many atrocities, Operation Remington included, the names of the panelists on that grand jury. Mellie agrees to Rowan’s “need,” tasks Lizzie with securing the names, and then provides them to Rowan.

Well, that was a huge, steaming mistake. Because in exchange for keeping her dirty laundry from airing, Mellie played a role in getting a bus shuttling the jurors shot en masse, execution-style. 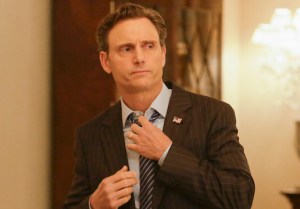 In the wake of that crisis, Lizzie — after presenting herself to be on Mellie’s side — blabs to Fitz that Mellie is in cahoots with Rowan, and that the First Lady was complicit in the slaughter (which also got the court stenographer killed). In response, Fitz sends the First Lady packing. As in, “Get out of my (White) House!”

Small consolation: Just prior, Mellie won the senate seat she did so (too?) much to secure.

Mellie was far from the only one to make a highly questionable concession, however. Rowan leaned on Cyrus as well, threatening the Chief of Staff unless he silences the B613 takedown campaign. Cyrus also acquiesces, going so far as to target his attorney general’s “pressure point” and threaten Abby. David in turns compels Olivia and Jake, detained by the CIA after trying to get its director involved, to recant any statements — or else. Rowan, after eliminating any agents who could ID him as Command and having (ill-fated) Travis “archive” any incriminating files, also makes Cyrus spring Maya from the hoosegow, with the proviso that she denies the spy org’s existence in perpetuity.

Eventually, Fitz also discovers all that Cyrus has been up to (“Working with the man who killed my son!”), earning Cy his own eviction from the White House. Taking over as CoS? Why, Lizzie Bear herself (played by newly minted series regular Portia De Rossi).

And then there is Huck, whose grim handiwork Quinn recognized in the bus full of dead jurors — also the result of Command and threats made against family. So distraught is Huck himself about his actions that he urges Quinn to pull the trigger on the gun she presses against his temple.

There was one winner in the finale, though: Olivia, who despite failing in her attempt to get the CIA involved in taking down B613 cleverly landed “doddering” Smithsonian wonk Elijah Pope behind bars, on embezzlement charges. She also was prompted by Jake (“My mission is over”) to go after what she is “owed” and be with the man she loves back. And to that end, in the closing scene, Liv shows up on the White House balcony… to reunite with her longtime love, as “Here Comes the Sun” scores the moment.