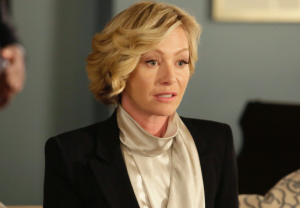 The following Q&A contains major spoilers about tonight’s Scandal finale, so, if you live on the West Coast or if the episode’s still sitting on your DVR, hit the nearest exit. Everyone else, you may pass go…

Poke the Bear too hard and the Bear will poke back.

In Thursday’s Scandal finale, Elizabeth “Lizzie Bear” North threw Mellie and Cyrus under the bus, and, for doing so, was handed the ultimate reward: Cyrus’ Chief of Staff post.

In an exclusive interview with TVLine, the actress justifies her character’s brazen power play, reveals the surprising way she found out about the season-ending twist and shares how she went about breaking the news to real-life wife (and self-proclaimed Scandal spoilerphobe) Ellen DeGeneres.

TVLINE | Congrats on the promotion, on screen and off.
New. Chief. Of. Staff. Bitches.

TVLINE | Ha!
It’s so exciting to finally talk about the finale because I haven’t been able to tell anybody anything.

TVLINE | How long have you known that Liz would be the new Chief of Staff?
Not long. We got the [first] draft [of the finale script] and it wasn’t in there. I think it was in the second or third [batch] of revisions. So it was only three days before I shot it that I knew what was going to happen. And it’s funny because when the rest of the cast read it they came up to me one-by-one and were like, “Oh my God, this is so incredible for you!” I was in the makeup [room] with Darby [Stanchfield] and she turned my chair around and said, “I have to look you in the eyes to talk about this with you. How great does it feel that you’re the new Chief of Staff?”

TVLINE | So you didn’t know until you read it in the script? No one told you beforehand?
No. I found out when the new [script] pages were emailed to me.

TVLINE | How did you react? Who did you tell? Ellen?
I was so excited, but I didn’t want to ruin it for Ellen — especially since it was the season finale. So I printed out the pages and I was holding them and I said to her, “Can I please tell you something.” She resisted for a while but I had to tell her. I just told her [the Chief of Staff] thing. She was happy for me, but she was also mad that she didn’t find out like everyone else. She really does get angry [about spoilers]. It’s really quite sweet. But I had to tell somebody. And I don’t trust anybody else.”

TVLINE | And how long have you known that you would be a series regular in Season 5?
I’ve known about the series-regular thing for many months. I actually knew about it a long time before the cast knew about it; it was an internal secret.

TVLINE | Storyline-wise, why do you think Liz betrayed Mellie?
She was tired of getting kicked around. She was sick of being Mellie’s dog, someone who fetches whatever she wants. It was payback time for Lizzie Bear. She had enough, so she made a big bold power move.

TVLINE | But Mellie didn’t really know what she was doing when she gave Rowan those names…
Yeah, it’s actually quite sad how it all blew up in her face. But all she really cared about was getting into the Senate and her own career.

TVLINE | Was this Liz’s MO all along?
Good question. Was this a long con? It’s not clear. But she kind of ends the season where she started. My very first scene was in Cyrus’ office. And I always looked at Cyrus and thought, “I want to play that role. I want to be Chief of Staff.” [Laughs] So it’s so crazy for me as an actress to be able to go into the next season in that role. I don’t know where Cyrus is going or how long I’m going to stay there but for right now it’s pretty exciting.

TVLINE | What was it like shooting the scene where you walk into Cyrus’ office with your stuff?
It was a wonderful moment. Jeff [Perry] was so brilliant in that scene. It was such an incredible moment between the two of us. It was so fun.

TVLINE | Are you excited to be heading into next season as a regular?
I’ve been here for the entire season, so, honestly, I already feel like I’m part of the family. It would’ve been very sad for me not to come back. And to come back with a guarantee of a few more episodes than [I was in this season] is really fantastic. It’s just a great ensemble cast. And we’re all really excited about the show — still. I came on as a fan, but all the actors are just as excited as when they first started the show. And I love Shonda Rhimes. I love Shonda Rhimes.

TVLINE | It’s kind of amazing how grateful and humble the cast remains after all these years. You don’t see that often in this business.
You don’t get that anywhere ever. I’ve been on a lot of shows. People get a little jaded or complacent. There’s something so magical about Scandal. I have to say, Kerry Washington really sets the tone for the rest of us. She is so enthusiastic and happy and grateful and humble. She is a class act. She shows everyone else how it’s done. I have to give the credit to her. This is an anomaly, as far as people genuinely supporting each other and being excited for what we’re making. We’re all so thrilled for each other, we all like each other. There’s no competitiveness. There’s no drama. We save the drama for on screen.