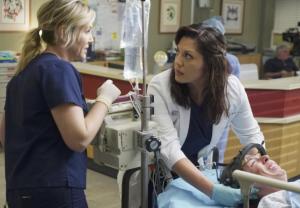 You might imagine that, since Grey’s Anatomy already broke up Callie and Arizona, killed off not only Jackson and April’s baby but Derek, too, and blinded Geena Davis this season, the show might go a little easy on us in its finale. But no, the hits just kept on coming this week. Think you can make it through even more heartache to get to the hour’s lighter moments? Read on.

HEAVY METAL | Picking up where “Time Stops” left off, “You’re My Home” started with April delivering Keith – still trapped in his car – to the ER. When he feared he wasn’t going to pull through, Mer inspired him by introducing him to his and babymama Joan’s newborn. “I’m-a see you when I get out of here,” he promised his son before warning Grey that now he’d be super pissed if she didn’t save him. Though it was beyond touch-and-go for a while there – poor guy looked like a pin cushion at one point! – he pulled through, as did Joan, thanks to Stephanie’s intervention. (Good thing she didn’t listen to Callie, who punished her for her interns’ disastrous mistake by yanking her from the case!)

THE HONEYMOON’S OVER | The whole Keith drama having reminded April of the high that she got from working overseas with Owen, she confessed to Jackson, “I feel like I’ve been called” – and, that being the case, she was eager to take the next flight to Jordan. Recognizing that her tour of duty had relit the spark in her that went out when their son died, Jackson supported her decision. “But,” he added sadly, “I don’t think I can be here when you come back.” (His wife apparently never even asked how he’d coped with their loss.)

FULL HOUSE | No sooner had Alex and Jo made up than he made the mistake of asking her if Mer and the kids could move in. To put it mildly, Jo didn’t respond favorably. “Congrats,” she spat. “Now you have a house and a family.” Later, he tried to explain that he wanted a house, a career, maybe even a dog with her. (Aww.) Still, she had to think about what she wanted. (More on that in a bit… )

TAKE TWO? | In a good mood after everyone kept Keith and Joan out of the morgue, Amelia was nicer to Owen than she’d been in what seems like ages. She even engaged her ex in playful banter about how, when Mer sold her and Derek’s place, she might let him keep his trailer. “Maybe,” he jokingly replied, “I should just get a house that doesn’t get parking tickets.” Then, getting serious, Amelia raised his hopes for a reunion by admitting that she wanted things to work out… with Joan and Keith, she quickly clarified. (Ow!)

RULES OF ENGAGEMENT | After Catherine told Richard that he couldn’t just appoint Bailey the new chief of surgery, he called his fiancée a dictator, prompting her to return his engagement ring. But he still insisted to Bailey – who, in turn, told Ben – that, come hell or high water, she would be the new chief. Later, sick of Richard and Catherine’s BS, Mer blurted out, “My husband is dead — yeah, I’m gonna play that card,” and ordered them to get their acts together. Which, amid a good deal of shouting, they did — though it put Bailey’s future as chief in limbo. Anyway, at last, Richard and Catherine tied the knot.

IN CLOSING | In other developments, Mer – hoping to patch things up with Amelia – gave her sister-in-law her cell phone and security code so that she could listen to Derek’s last message. With Owen by her side, she finally did play the voice-mail – her brother going on about his perfect last ferry ride and telling Mer that he loves her. Maggie confessed to her half sister that her mother has been having an affair for 11 years, and her adoptive parents were at last getting a divorce. Jo decided that she did indeed want to be with Alex – so much so that she found a home for them to buy so he could sell Mer his place. And, at the hour’s close, Mer and Co. danced it out, shaking off their tears.

OK, your turn. What did you think of the episode – and the season? Hit the comments!