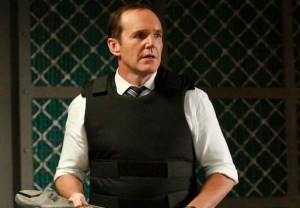 Yikes. That second bonus scene was a doozy.

ABC’s Agents of S.H.I.E.L.D. wrapped its sophomore run on Tuesday night with a two-hour finale that pitted agents against Inhumans, added at least four (!) deaths to TVLine’s May Sweeps Scorecard, planted a seed for a future Marvel movie and, in that final, shocking sequence, had some alien goo gobble up one of our favorites.

But just think of the stories that Simmons and Emma Swan could one day share…!

Because so much happened that any standard-issue human would be hard-pressed to do it justice in one page, here is a round-up of the most memorable moments:

STUDENT VS. MASTER | With the Afterlifers “under attack” from a Quinjet, escalating tensions tee up a Donnybrook between May and her onetime padawan, Skye.

MONSTER MASH | Hopped up on a proprietary blend of gorilla testosterone, amphetamines and peppermint oil, Cal’s inner Mr. Hyde is nudged out of hiding by an adrenaline injection.

DON’T RAINA ON MY PARADE | Raina makes Jiaying prickly, by threatening to reveal the Afterlife overlord for who she really is. Except, Raina, you won’t — because Jiaying just rammed a knife into your throat (and as an aghast Skye looked on!).

YOU GOT ME IN CHAINS | …but not for long, Bobbi reveals, withstanding Ward’s torture tactics long enough to wrest herself free from shackles and gain the upper hand on her captor. Alas, one kickass melee later, Mockingbird is down for the count, her leg mercilessly stomped on for bad measure.

CAN WE TALK? | When Simmons 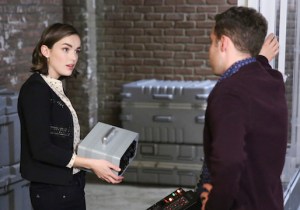 suggests that she and Fitz finally discuss what he said to her “at the bottom of the ocean” a full season ago, he defers, saying there’s nothing to talk about. But maybe there is, she hints…. Hey, this might end well!

BOBBI-TRAPPED | When Ward sets a trap that will blow the brains out of the first person who comes to save her, Bobbi uses every bit of her might to thrust herself in front of the gun barrel, just as Hunter breaches the door. Luckily, the bullet wounds she sustains are grave but not lethal. (After all, she had a spinoff to almost be a part of!) That said, Bobbi seems ready to hang up her neoprene.

GINGERS SNAPPED | A redheaded “multiplier” leads the Inhumans’ infiltration of the S.H.I.E.L.D. carrier — until Lincoln defies his kind and zaps the original ginger to shut them all down.

‘LIVE BY THE SWORD…’ | Agent 33 engages in one act of impersonation too many, when she sports May’s face during S.H.I.E.L.D’s mission to rescue Bobbi, only to get shot to death by an unwitting, trigger-happy Ward. (Aside: Do we really think Ward would have killed May in so ham-handed a way? Wouldn’t you have expected something more specific?)

‘I’M THE GUY WHO KILLS GORDON’ | Except that when all is said and done (and though Mack got in some whacks), it’s Fitz, of all people, who winds up with the teleporter impaled on his steel pipe.

PUT ME IN, COACH | Coulson may have bragged of his Little League batting prowess, but it’s his fielding skills that save the day, when he makes a diving, Risky Business-caliber catch of the Terrigen crystal dropped by dying Gordon. Alas, Phil will have to wear any Golden Glove on his other mitt, since Mack thinks fast to axe off the boss man’s Diviner-infected hand.

A KISS BEFORE JIAYING | Intervening on a mother/daughter battle of wills, Cal commits mariticide, ending his wife’s troubled, troubled life and saving Daisy the guilt.

THANKS FOR THE MEMORIES | Heading back into S.H.I.E.L.D. custody, Cal bids his Daisy a sad adieu, but she avows to pay him visits. And she in fact does — though the kindly Dr. Winslow she trades pleasantries 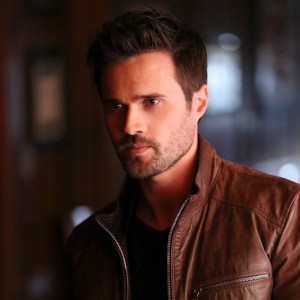 with has no memory of their past/connection, thanks to the T.A.H.I.T.I. program.

HYDRA GROWS A NEW HEAD | And it’s a traditionally handsome one, attached to Grant Ward. Yea…?

MAY DAZE | In the wake of this latest near-cataclysm, May decides to take leave from S.H.I.E.L.D. (packing up locker No. 33, heh) and get away with ex-hubby Andrew (with a string bikini and a smile included!).

THIS IS PRECISELY WHY I WON’T TAKE OMEGA-3 CAPSULES. I FEEL TOTALLY VALIDATED NOW. (SORRY, TRAINER!) | In the closing scene, we see that the crateful of homegrown Terrigen crystals that Skye “quaked” into the ocean are now dissolving into the water, tainting sea life and thus making their way into fish oil supplements. (“Health Benefits That Will Change Your Life,” indeed.) Is this how Marvel is populating the July 2019 Inhumans movie?

SAVE THAT DATE | Picking up on Simmons’ flirty cue from earlier, Fitz (in his own, roundabout manner) suggests that maybe they get together for dinner later, somewhere… “nice.” But while he’s off Yelping restaurants, Simmons checks the latch on the Kree stone they have in safekeeping — just as the alien artifact gelatinizes, splashes out into the room and… well… sucks the scientist into its re-petrified self. Whaaaaat?!

What was your favorite part of the S.H.I.E.L.D. Season 2 finale?