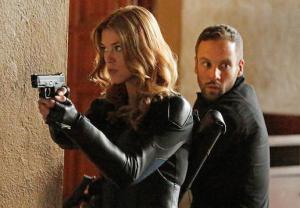 Embedded within the flurry of renewals and new series orders issued by ABC on Thursday night was the non-announcement that the Agents of S.H.I.E.L.D. spinoff had died on the vine.

The prospective offshoot was said to pivot off a storyline unfolding at the end of this season and revolve around the characters of Bobbi “Mockingbird” Morse (played by Adrianne Palicki) and colleague/sometime-beau Lance Hunter (Nick Blood).

Other buzzy ABC pilots failing to get out of the gate, per our sister site Deadline, include the multigenerational family sitcom that would have reunited Vacation‘s Chevy Chase and Beverly D’Angelo, that NBA-based and -blessed comedy and the Revenge-y Kingmakers, while The Broad Squad may get reworked for future reconsideration.

Are you relieved that S.H.I.E.L.D. will keep Bobbi and Hunter?