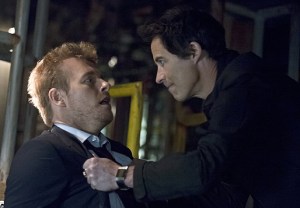 The Flash‘s Eddie may have been in the dark about his evil, speedy descendant Eobard Thawne until recently, but his portrayer Rick Cosnett has been in the know about his character’s shady relations for a very long time.

“I’ve been holding that secret for a while, it’s been rough,” the actor says with a laugh. “We were given a great trajectory of our characters at the beginning [of the series]. … But there’s still a whole lot more to unravel.”

First, Barry needs to make good on his promise to Iris to find her M.I.A. boyfriend, last seen being taken away by the Reverse-Flash.

“The gang actually finds Eddie,” Cosnett reveals. “I can’t say what state they find him in, or if they rescue him, but they do find him a very different man than what he was — than what we’ve seen til now at least. It’s a life-changing moment for Eddie.”

Below, Cosnett previews Eddie’s shifting allegiances, feelings about his and Iris’ future, and the big surprise in store in the May 19 season ender (The CW, 8/7c).

TVLINE | Viewers know Eddie as a good guy, but given what he’s learned and how much time he’s spending with Eobard, how malleable are his allegiances?
Very malleable. They are related. They are cut from the same cloth in a sense. … Eddie has a pretty big backbone. He talks back to Eobard. They have the same sort of strength of character underneath it all. Of course, Eddie’s having to deal with so much information at one time. At the moment, his cogs are spinning really fast, and he’s at a crossroads now of what to do, whether he takes this information about Iris and Barry and him not becoming anything in a positive way or a negative way or tries to change things. The power really is in his own hands, but whether Eddie knows that or not, I can’t say.

TVLINE | Does it inspire Eddie to step up his game, knowing that he doesn’t amount to much?
Well, it definitely gives him the option. We’re going to see that play out. There’s a big surprise coming up in the finale. I’m a really big part of the whole process. It’s going to be a really cool ending. 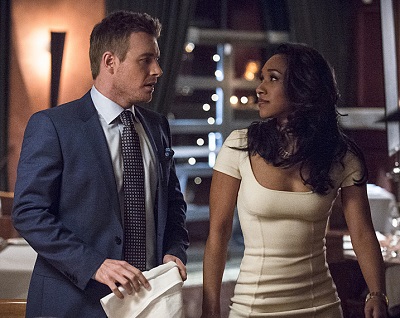 TVLINE | Does finding out that Iris marries Barry make Eddie want to go after her more? Or does he just accept his fate?
That’s a very good question. I think Eddie always had a sixth sense that they had something, even though he didn’t admit it for a very long time. So this has really just cemented that. He has to make a choice between doing the best thing for Iris and the best thing for himself. What has been so endearing about Eddie is we know that, usually, he will make a very sensible choice. He’s a bit of the voice of reason, I feel like, in a lot of senses. We very much sympathize with him. But things have definitely changed. He’s been down in this dungeon for quite a long time, and he’s had way too much time to think and way too much time to change perspectives. I think people are going to be really intrigued to see where Eddie goes.

TVLINE | So is the proposal off the table now?
I hope not. [Laughs] Just because I love Candice [Patton]. You’ll just have to wait and see about that. That storyline is going to unravel as well.

TVLINE | Executive producer Andrew Kreisberg told me there were a lot of tears at the table read for the finale. How worried should we be about Eddie’s fate, considering who currently has captured him?
[Laughs] It’s a very emotional episode. It’s just been such a huge season. Apparently, it looks amazing. It’s mainly the scenes between Grant [Gustin] and Jesse [L. Martin] that have been the bread and butter of the show. It makes us all just break down and cry every time. It’s really touching. … It’s going to be an awesome finale.