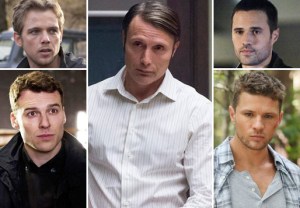 Question: Do you have any scoop on the season finale of Agents of S.H.I.E.L.D.? —Deana
Ausiello: The first half of Tuesday’s two-hour closer alone is chock-a-block with reveals, including what exactly was in the vials found on Cal (gorilla testosterone?!), what Ward wants from Bobbi and just how far (too far?) Jiaying will go to ignite a war between the Inhumans and S.H.I.E.L.D. The first hour also boasts two sizable hand-to-hand combat sequences (girl-girl, guy-girl), you’ll find out what the “key” to saving the Inhumans from “death and destruction” is, and you’ll hear someone say this about Ward: “When I find him, I’m gonna kill him.” (And you believe that person!) 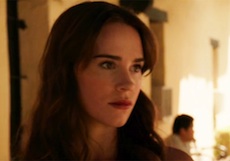 Question: Can we expect to see any more surprise return characters in the Revenge series finale? — Carter
Ausiello: I’m not sure if this qualifies as a “surprise,” Carter, but you haven’t seen the last of Charlotte! Amanda’s half-sister will make another appearance in the final episode, and it sounds like she’ll play a key role in the unfolding drama. “She delivers a huge piece of information near the end of the episode,” showrunner Sunil Nayar teases. “I can guarantee it will generate conversation.”

Any scoop on the Once Upon a Time finale? Please? –Paul
As AA was going to press, Matt Mitovich had juuuuuust cued up Sunday’s two-hour closer, which opens, he says, with perhaps the most Lost-like sequence in the show’s history, as we find out how Isaac came to be an Author. And lest you think the Snow Dark/Bandit Regina/Noble Rumple role-reversal twist is played just for fun, be assured that it’s all part of a rather dark mystery/puzzle that Henry must solve, in what is far and away the lad’s most “-centric”episode to date.

Question: I have a question concerning Once Upon a Time. Will we ever know what happened between Will Scarlett and Anastasia (The White Queen)? Any chance to see her in the future? —Marine
Ausiello: In the future, yes, there’s a chance. But during this season, which has only Sunday’s two-hour finale remaining, no. “Unfortunately, there was not room to bring Anastasia on this year,” says series co-creator Adam Horowitz. “But hopefully we will in the future, because we’d love to tell that story.”

Question: Do you have any scoop on Rookie Blue? — Samantha
Ausiello: Thanks to a juicy new teaser video for Season 6 (premiering June 25 on ABC) that leaked onto the weblets courtesy of our friends up North, we’re freaking out for reasons both good and bad. The exciting, didn’t-see-that-coming twist: Nick’s mysterious love interest Juliet is a cop, too! Then there’s the we-didn’t-want-to-see-that-coming twist: Duncan appears to be putting the moves on newly single Chloe. Elsewhere, Andy is struggling with the news that Sam’s ex Marlo is pregnant, Dov makes an unexpected friend, Gail is embracing the idea of motherhood with a bucket list, and a drug-free Chris is back (but hardly out of danger).

Question: Any last teasers for this season of Hawaii Five-0? —Dean
Ausiello: Grace Park warns that in this Friday’s double-episode finale, somewhere amidst chasing down a nuclear bomb and steering bride and groom Kono and Adam down the aisle, “a new Wo Fat is born.” (Metaphorically, of course. Not a reincarnation storyline.)

Question: I am a huge Good Wife fan. Do you have any scoop on the finale? —Noemi
Ausiello: Were you a little surprised that Alicia being forced to step down from the State’s Attorney office following an election-fraud scandal didn’t cause more blowback for Illinois’ first couple? Showrunner Robert King promises that that subject — and Peter and Alicia’s political life in general — will most definitely play a role in Sunday’s Season 6 capper. But how to explain the media not making any fuss about the fact that the Florricks haven’t lived under the same roof for quite some time? “We’ve been following news stories about governors, and often the spouse is working separately from where the government business is handled,” King explains with a laugh. “Peter in theory is in Springfield, and Alicia is in Chicago, and you can’t forget the friendly looking-away the press sometimes does [when] governors and other public figures have business that takes them away from home.” So yes, while Alicia and Peter keeping their very separate lives on the down-low is “not completely realistic,” King admits, there are also some real-life precedents on which the show can hang its hat.

Question: After this week’s episode of Bates Motel, I’m definitely going to need some Dylan-Emma scoop. They hit me out of nowhere, but I love it! —Nancy
Ausiello: I’m with you, Nancypants. I am falling hard for that relationship, which, I was surprised to learn from showrunner Kerry Ehrin, was not preordained. “It was one of those things that came out of the organic life of the show and the actors and the storytelling,” she tells me. “It just started to make sense.” On the scoop front, look for the romance to take a swoon-senational turn in next Monday’s sensational finale.

Question: Let’s talk Elementary for a moment — got any finale scoop? —Amanda
Ausiello: Although Natalie Dormer is not back for next Thursday’s season-ender, Irene Adler/Moriarity does play a part in the hour. “She’s referenced,” executive producer Rob Doherty tells TVLine coyly. The EP also reveals that he “toyed with the possibility of bringing [Ophelia Lovibond as] Kitty back for the finale, but I felt — if I do say so — we did a really nice job of tying up her story at the halfway point of the season. So it didn’t seem right to do two finales that would feature Kitty.” 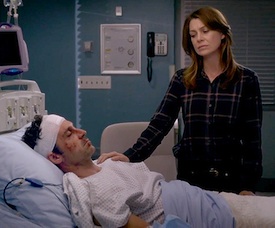 Question: Please tell me that Grey’s Anatomy‘s Meredith will hold responsible the hospital that Derek died in. At the very least, she should sue the neurosurgeon. —Laura
Ausiello: I can’t see Grey’s doing another protracted lawsuit storyline so soon after the Season 9 legal quagmire that followed the deadly plane crash that claimed the lives of Lexie and Mark. But I could be wrong.

Question: Diehard Grey’s Anatomy fan here. Please tell me that “Owelia” are over. —Liv
Ausiello: I would if I could but I can’t. Those two are apparently in it for the long-ish haul.

Question: I was wondering if you have any details on a Season 2 for Secrets and Lies? The bonus clip made it seem like Ryan Phillippe would not be returning. Please say it ain’t so. —Christina
Ausiello: It ain’t… actually, it is so. Phillippe only signed on for one season (which explains why ABC killed off his character Ben, as strongly intimated in that flash-forward scene). Season 2 would feature a new case, once again presided over by Juliette Lewis’ super-cheery, positively effervescent detective.

Question: Any new Beauty and the Beast Season 3 spoilers? —Jacob
Ausiello: Forget Season 3. I’ve moved on to Season 4, production on which begins later this month. The show is adding a new series-regular character by the name of Kyle. He’s a mid-20s EMT who is ridiculously charming, super-athletic and unnaturally handsome. So, he’s basically Colton Haynes?

This AAnd That…
♦ I just heard how Hannibal‘s third season ends and there are no words… except maybe these: The twist ending is an homage of sorts to one of my favorite cliffhangers of all time.
♦ To those Jane the Virgin disciples threatening to unfollow me on Twitter: I meant what I said and I said what I meant.
♦ If any Emmy voters are reading this, do me a solid and print out this list and refer to it when you fill out your nominations ballot next month. I don’t think it’s too much to ask.