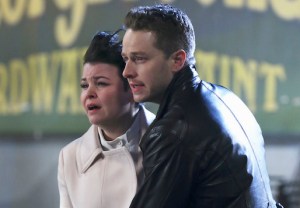 Almost a year to the day that Once Upon a Time surpised viewers with a parting glimpse of Queen Elsa, the ABC series this Sunday will uncork another top-secret season-ending scene.

But unlike a year ago, this filmed-in-secrecy twist won’t introduce any familiar fairy tale face but a different kind of surprise element, one that will have repercussions for Season 5.

“There is a top-secret scene that I’m shocked hasn’t got out — but there’s still time!” Once co-creator Eddy Kitsis tells TVLine with a knowing laugh. “We’ll absolutely be setting up what Season 5 will be, but unlike last year where it was, ‘Hey, it’s Frozen,’ or the year before which was, ‘Hey, we’re going to Neverland,’ this one will be much more like Season 1 in that it’s a condition of the show that changes and has ramifications for everyone.”

Adds co-creator Adam Horowitz: “If we zigged in the past, we’re hoping to zag this time.”

Whatever the hush-hush moment looks like, it will cap a two-hour finale that, as revealed in promos and photos, illustrates the role-reversing history rewrite that a dying Rumplestiltskin is dictating to The Author, Isaac, for the new storybook Heroes & Villains. Though Regina no longer requires the scribe’s services to secure her own happy ending, Kitsis says, “We feel we owe it to the audience to show what happens whan the Author does start to write, and what he can do.”

Speaking of authors, the Once bosses are in no rush to write toward a predetermined end date, as the ABC drama they previously called home, Lost, famously did, announcing three years in advance that its story would end after Season 6.

“I don’t think we want to set out a particular end date for this show,” Horowitz said when TVLine bandied about the possibly predetermining a finish line. (First things first, ABC has yet to announce 2015-16 TV season pick-ups for any of its scripted series.)  “I mean, we have in our mind how we would like to wrap up the stories of these characters. But without having the specifics of exactly how we get there, it’s really not possible to [set a series finale date]. It’s more about building everything towards what we think would be a satisfying conclusion.”

“We know kind of where we want to end the show,” adds Kitsis. “It’s really a matter of how long, how many more years that will take.”

That said, Kitsis notes, “We would much rather to go out on our terms than be gently kicked out the door!”