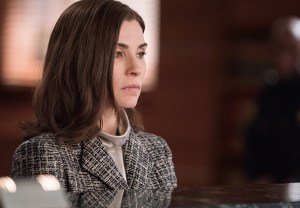 Kalinda Sharma isn’t the only character who’s not returning to The Good Wife in Season 7.

“We knew the [season’s] first 13 episodes would be about Alicia being dragged into politics, but what we really wanted to show was the disparity between Alicia’s image of herself and the fictional public’s image of her. Those were so far apart,” explains Robert King. “The people thought of her as St. Alicia, but she knew that she’d had an affair with Will and had all these other things going on. We needed to use the political sphere to break that image.”

With only an hour left in the season, he adds, Alicia “has nothing left, in a way. She doesn’t even have people considering her saintly. We wanted to get there, and we couldn’t if she only remained a lawyer. And that’s why we wanted to do the political thing.”

Michelle King says the show’s writing staff knew from the start of Season 6 that “that was the outcome we were racing toward. It was fun to watch Alicia reluctantly get into politics, think it was a triumph for her, and then at the end wind up being so utterly humiliated — a little bit by what she’s done, but ultimately, she’s a victim. She had nothing to do with what the [Democratic] party finally decided, with them taking [her elected office] away from her.”

TVLine caught up with the husband-and-wife team to find out details of the final scene between Mere Mortal Alicia and Kalinda (and whether they’ll physically interact), the Season 7 arcs they wish they’d had more time to explore and the possibility of a cliffhanger at the end of the finale.

TVLINE | Let’s start with Kalinda: You said in a recent interview that Archie Panjabi will be back for the finale — and that you’ll be answering a lot more questions about her character. That said, she bid her farewells (in enigmatic Kalinda fashion, of course) and sneaked out of town in “The Deconstruction.” Why not leave it there? Why have her back?
Robert King: We didn’t have the element of surprise we had with Josh Charles — where there was a real shock associated with it, except for [TVLine], thanks very much! [Laughs] What we wanted to do was have the surprise in that [Kalinda’s goodbye] wasn’t the last episode — and then have the feeling Cary does coming off of that: “Really, is that it? Is that my goodbye?” We obviously knew we had Archie ’til the end of the year — and she was excited to do more — so we wanted to have these little encores. [Laughs] It’s not wrong to be disappointed by the abruptness of Kalinda leaving in Episode 20 because we knew we had these two little encores. And again, it’s playing with form — so people are thrown a little bit by the moves. And by the way, this was instinctual. We didn’t really have a plan. At one point we were thinking, “wouldn’t it be fun if we ended Kalinda’s story much earlier than everyone [expected]?” But then stories came out of that, and this is the one that felt like it would be the most satisfying in the long run to fans. 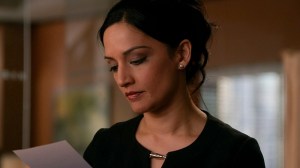 TVLINE | What kinds of questions about Kalinda will be answered— and might one of them be the contents of her note to Alicia?
Robert King: Other than the note to Alicia, what Alicia and Kalinda think of each other now that they’ve all been humbled by the experience of the last six years. They had a breakup, essentially, at the end of Season 2. What they feel about all that has happened, I would say. We have Wallace Shawn for this last episode, as Bishop’s fixer-lawyer Charles Lester. There will be issues he raises that only Kalinda can answer. Is Kalinda’s life in danger? Questions like that are in the mix.

TVLINE | At least half the comments on my recap of last Sunday’s episode, “Don’t Fail,” were from fans expressing frustration that the flashback bar scene between Kalinda and Alicia was shot in a way where it wasn’t clear that Julianna Margulies and Archie Panjabi were in each other’s physical presence. How would you respond to that frustration?
Robert King: That was intentional. [Laughs raucously.] I mean, we’re sorry, we’re kind of having fun. We don’t want to frustrate fans, but we also want it to be one whole experience over the course of the year. Look, part of it was that when Alicia imagines things, usually that is [a] two-camera [setup]. We’ve had these Ferris Bueller-like scenes where people talk directly to the camera — and that is supposed to suggest we’re in Alicia’s imagination. But I think — and I will put my emphasis on “I think” — fans will be satisfied once they see the last episode. And I know it’s hard to see a continuum — it’s not like Transparent or House of Cards or Orange Is the New Black, where you can race from episode to episode. And we’re trying to use that as a strength of the show, that there’s a little bit of anticipation, at least for hardcore fans, between episodes. Otherwise, I don’t think we’d be having this conversation. If you could download them all and watch them at once, we’d be having one conversation: What was the point of the whole year?

TVLINE | Speaking of that, looking back at the season as a whole — what arc are you happiest with?
Robert King: I’ll start with character and then move to a theme. I’m happiest with the character development from Cary’s arrest leading into Kalinda’s accidental faking of evidence into Kalinda having to leave. There’s a strong through-line from one to the other. The only way you can handle a 22-episode season is to tell one story in the beginning of the season, and then a second story in the latter half. What I like is that one flowed right into the other — one caused the other.

I also liked the idea, thematically, of using movie-making and editing to tell a lying narrative about someone’s life. I very much like how that got developed through the year — through the various editing rooms we’ve seen. I’d like to play with that even more.

TVLINE | Was there any arc this season you weren’t as happy with — that you wish you had time to tweak or that you want to revisit in Season 7?
Michelle King: I had some unhappiness as a result of too much happiness — because David Hyde Pierce was so wonderful [as Alicia’s political rival Frank Prady], I wish we could’ve had even more of him. He went off to direct a play on Broadway, so we couldn’t get him for the last episodes of the season — and as far as I’m concerned, that was a pity.
Robert King: I love what we developed with Christine Baranski and Oliver Platt, and I wish we’d had more time to spend on that, but he’s going over to a show on NBC [Chicago Med]. 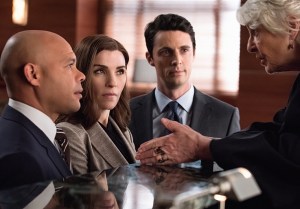 TVLINE | Was Alicia asking Finn to be her law partner the end of their romantic connection?
Michelle King: I don’t think we can answer that.
Robert King: The last episode will answer that.

TVLINE | How surprised will viewers be about who’s behind the door — and how excited are you for them to find out? A TVLine reader poll put Kalinda at #1, “Will” at #2 and Lemond Bishop at #3.
Robert King: [Laughs] We’re very excited for them to find out.
Michelle King: That’s another “stay tuned,” Michael.

TVLINE | Well, I had to at least try to get some hints.
Michelle King: [Laughs] Sorry!

TVLINE | Season 4 ended with a knock on the door — and Alicia not seeing Will, but rather Cary, which was the start of them splitting off and forming Florrick-Agos. Season 5 ended with Eli’s question about Alicia running for office. Can we expect some kind of “Boom!” moment at the end of Sunday’s finale that will be the focal point or activating event for Season 7?
Robert King: We’ve been enjoying that kind of balance at the end of the season, where there’s a knock at the door or a question that sets up the next chapter of Alicia’s story. It isn’t really a cliffhanger, it’s more of a way to figure out where the show might be headed. And, yeah, we will continue that at the end of this season.