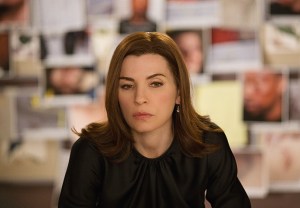 I’m not going to lie to you: I’m a lot more excited than I ought to be about the prospect of The Good Wife‘s seventh season focusing on Alicia Florrick tackling daily home-renovation projects as a bridge to her 5pm one-woman happy hour.

But lest network television’s most consistently challenging drama turn into a home-furnishings fantasy (directed by Nancy Meyers and guest-starring Diane Keaton), I’m happy to report that this week’s installment, titled “Don’t Fail,” could’ve just as easily been called “How Alicia Got Her Courtroom Groove Back.” (No, this doesn’t mean Taye Diggs’ quickly forgotten Dean Levine-Wilkins returned to the mix in the wake of Alicia’s fall from grace. Where is that dashing attorney, though, come to think of it?)

Quite the contrary, a little bit of kismet, a push from “drinking buddy” (is that the proper term for “forbidden lust puppy” nowadays?) Finn Polmar and a few bitchy words from opposing counsel sent The Lady Florrick back into delicious, morally ambiguous battle mode — seemingly changing the course of her life/career in the process. Without further ado, let’s recap the decidedly contained hour — complete with a brief but beautiful Alicia-Kalinda drinking session (!!!!!!!!!!!!) (in flashback, but still…).

OK, so I’m going to attempt to sum up this week’s episode in a handful of paragraphs:

Alicia gets a call from an old client (Southland‘s underrated Dorian Missick) whom she’d cleared on an attempted murder charge back in her associate days — learning he’s now being prosecuted for murder of the same man, who recently died from injuries related to his prior assault. Our protagonist, who’s been spending her days sanding down an old door and fending off phone calls from telemarketers, decides to join the case alongside a novice attorney (Aya Cash of You’re the Worst — a genius FX sitcom everyone should be watching) and winds up reviewing old audio tapes and reminiscing about arguing/researching the initial case with Cary, Kalinda and even Diane.

In perhaps my favorite scene from the hour, Cary hand delivers to Alicia a box of old notes he took on the original case — where he was tasked by Diane with playing second chair and coming up with alternative case theories. When he learns (over glasses of wine) about Alicia’s plans to travel the path he’d laid out — he grins and abandons his earlier sentiment that Alicia “always thought I was more competitive than I really was.” Instead, he’s simply delighted his theories will have their day in court — “like a director’s cut.” (Alicia and Cary’s innate/overlapping love of the law — and legal strategy — makes them such terrific allies… and this brief waltz between the two gave me an endorphin rush that took me all the way back to “Red Team, Blue Team.”)

Anyhow, Alicia ultimately learns from Finn (who’s been pushing her to get back to work) that ADA Matan Brody’s case rests on a witness who’d fingered her client based on a photo array pushed on him by an unscrupulous cop. That detective had since been subjected to an Internal Affairs investigation for exactly this kind of misdeed. The judge presiding over the trial, however, tells Alicia to give up her source (since internal affairs hearings are supposed to be sealed) or face time in a cell for contempt of court.

As Alicia thinks back on one of her first times knocking back tequila with Kalinda — and remembering a time when she thought the law was actually good, not just neutral — she remembers a key bit of advice from her former bestie/recently disappeared investigator: If you believe in your client, do everything you can to defend him/her — up to, but not including, lying under oath. And so, in a sweet, poetic moment, Alicia tells the judge the next day that it was Kalinda who gave up the info about the crooked cop — “I answered your question, your honor,” she notes, in a moment of carefully worded perfection — and her client goes free.

“I want to learn from you,” grins her young co-counsel. “No, you don’t,” sighs Alicia. But shortly thereafter, she and Grace are turning Zach’s bedroom into a makeshift office (naturally, right before mother and son call a truce and he decides to come for an overnight the following day). And then, sharing some hard liquor with Finn — and no longer hiding under a baseball cap in a darkened booth — Alicia asks her sometimes partner in thinking about infidelity (while only lightly brushing limbs against limbs) if he wants to be her partner… in starting a law firm devoted only to clients in whom they can believe.

What’s telling, though, is that The Good Wife‘s most uncorrupted, morally grounded character — the always fascinating Grace — is the one who poses the toughest question of all about her mom’s new business plan: “Can you make money doing that?”

That might be a question that won’t be definitively answered ’til next fall (or winter, even), but if Julianna Margulies’ alter-ego returns to fighting the good (or something close to it) fight against those who underestimate her doggedness, I’m definitely intrigued.

Your turn. What did you think of this week’s Good Wife? Were you happy to see Alicia back in the courtroom? And is it a good idea for her to be business partners with Finn — or were you hoping for a different kind of coupling? Sound off in the comments!