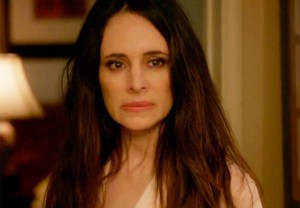 Heads up: Stop reading now if you haven’t watched Sunday’s episode of Revenge. It’s about to get real spoilery up in here.

Ding dong, the witch is… not dead, apparently.

The final moments of this week’s Revenge revealed that Victoria Grayson did not, in fact, perish in the fire at Grayson Manor — you know, despite what Madeleine Stowe told us — but showrunner Sunil Nayar urges fans to reserve judgment until Sunday’s series finale (ABC, 10/9c).

“We’re going to fill out the whole rest of [Victoria’s] story in the next episode with one more fantastic revelation,” Nayar tells TVLine. “You’ll have a much better sense of what it was Victoria did. Emily’s theory is correct, for the most part, but we saved one last detail for the final episode.”

Below, Nayar talks more about Victoria’s shocking return, explains Ben’s death and teases what’s in store for Emily/Amanda in the series finale.

TVLINE | To be honest, the fan reaction seems mixed. Some people feel cheated by Victoria’s return, while others are glad to see her back. What reaction were you hoping for?
Realistically, that’s exactly what I was expecting to get, but even the people who might feel cheated won’t feel that way when they see the last episode. You get those last moments from these two women that the audience deserves and wants. [Faking a death is] something that other shows have done before, but we love the way we went about doing it, and the repercussions of the action of having done it. It wasn’t just a cheap fake-out, and there was no other way to end the show than to have these two women in the last episode. Even people who are mad at us for doing it will watch the finale and say, “I’m actually really glad they did that.”

TVLINE | Let’s talk about that final moment, which we see in the promo…
It’s a huge moment, one that this show has been chugging towards for four years. When we finally have that moment, it’s going to be really moving. [Emily and Victoria] also realize there’s an end of the line; they’ve gotten to the point where Emily’s about to pull the trigger, which she’s never done before. It’s not something that’s easily done, even though this is her ultimate enemy. That scene between the two of them is so charged, and the way it ends is really stunning.

TVLINE | The way Victoria asks, “Are you ready?” reminds me of how Stowe told us Victoria had a death wish.
There’s an element of that, I think, but it’s more so that what’s happening between them is an inevitability, one which began the moment Emily showed up in the Hamptons. Victoria has lost everything, but it almost couldn’t have ended any other way but this.

TVLINE | OK, let’s talk about Ben: Thank you for killing him. What went into that decision?
Ben got his nose into a lot of things, but at the end of the day, he was a good guy who just wanted to do the right thing for people he cared about, and you’ll see its effect on Emily going into the last episode. She has to feel culpable for this; he only died because of a path she set him on in an attempt to clear her name. There’s a reckoning that comes with Ben’s passing. We also thought it would be great if he realized Emily was telling the truth, then Courtney Love [hit] him in the back of the head. Brian Hallisay was super gracious about it.

TVLINE | Is she the one who stabs Nolan’s hand in the promo? I thought it might have been Louise, but that’s not very Louise-like behavior.
You don’t know, though! Louise is a very surprising woman who does very surprising things in the finale.

Revenge fans, we’ll have more series finale scoop as the episode approaches, but for now, drop a comment with your reaction to last night’s episode: Are you glad Victoria is back? Happy Ben’s down for the count? How do you hope it all ends?