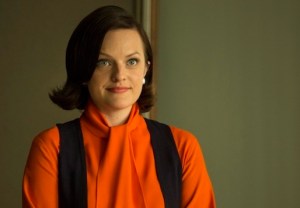 Ugh, moving. Am I right?

First there’s the making sure all of your stuff gets boxed up and relocated to the proper destination. Then there’s the unpacking and realizing that you’ve accidentally opened a crate of ennui, a realization that makes it tough to continue doing the work you’ve done for years, so pointless does the endeavor seem when the great, wide world is out there for the taking and/or a sad waitress might need saving.

Finally, there’s the removing the bubble wrap from the pesky awareness that it’s a man’s, man’s, man’s world — and it will be for the foreseeable future.

OK, maybe these moving woes are specific to Mad Men, which physically relocates Sterling Cooper & Partners from its home office to the McCann Erickson mothership in this week’s episode. But can’t you relate? Transitions can be hard for all of us (and, as Don and Joan find, very, very hard for some of us), and there’s always a vase chipped or a table nicked or a passion marginalized, mocked, threatened and quietly ushered out. (Sigh. Poor Joanie.)

But I’m getting ahead of myself. Let’s review what happens in “Lost Horizon.”

I AM JOAN, HEAR ME ROAR | I’m going to begin with Joan’s storyline, because I want to purge the ickiness from my brain as soon as possible. Upon moving into her new digs at McCann Erickson, she’s paired with Dennis (AKA one of the idiots who made her utter, “I want to burn this place down” during the Topaz nylon discussion a few episodes back). When he alienates the Avon rep during a phone call, Joan asks Ferg for some assistance. So Ferg takes Dennis off the account — and puts himself in. Dennis “has a wife and three children. He’s not going to work for a girl. What’s he gonna say? ‘She’s my boss?'” Ferg scoffs. I think the grossest part of this whole conversation is the way he acts like he’s doing Joan a favor by putting forth a vision of their working relationship, which will involve weekends away and “a good time.” I physically cringe as Ferg takes Joan’s hand between both of his sweaty meat shovels and promises “From now on, no one comes between me and your business.”

Richard tells Joan there are two ways to solve a business problem: lawyers or intimidation. (He uses a lot more words, but that’s the drift.) But at her meeting with McCann boss Jim Hobart, she winds up using a blend of both. Hobart quickly drops his good-guy act to make it clear that she’s a no one at the new firm, despite her SC&P partnership, and if she doesn’t find a way to get along in the new regime, “you’ll be getting a letter from our lawyer.”

“I wonder how many women here would like to speak with a lawyer,” Joan asks pointedly, pushing the old man into near apoplexy. (Side note: Seriously, he turns scarlet. It’s amazing to watch.) He offers her 50 cents on the dollar for her shares if it means “never to see your face again.” She name-checks Betty Friedan, the ACLU and the recent Women’s Strike for Equality before stalking out of his office. Place? BURNED DOWN.

The scene is so powerful, and Joan’s fuse has been smoking for so long, that the confrontation feels cathartic. Now, you think, our Joan is going to win over all those oafs. Nope. Roger comes to her office the next day to urge her to take the buyout. “You started something that could leave you with nothing,” he says. I honestly think Rog thinks he’s looking out for her best interests — and an earlier scene proves once again how little sentimentality he has about business — but it’s a terrible thing to hear someone you love(d) argue for the other side, especially when it’s a side history will prove wrong. She tears up, grabs a photo of Kevin and her Rolodex from her desk, and leaves. “Tell him he has a deal,” she says on the way out. Joan Harris, ladies and gentlemen. Doing the soul-crushingly smart thing since 1960.

LATER! | Earlier in the episode, Jim welcomes Don to the building and talks up some of the big accounts he’ll have under his control. Hobart waited 10 years to have Draper on his team, he notes, saying, “You’re my white whale.” I’m not sure Moby would be the word I would put in front of Dick to describe Don, but OK. We’ll go with it.

Everything is peachy — Meredith is decorating Don’s apartment, there are roast beef sandwiches for a client meeting — until Don sits down in a meeting for Miller beer and suddenly seems completely out of his element. Maybe it’s that the research guy presenting is giving a Draper-caliber pitch. (You know, the one that goes, “Warm feeling, warm feeling, honeyed voice, wry smile, dash o’ misogyny, toothless joke, beat for… emotion?”) Maybe it’s that there are far more people in the room than Don is used to working with. But he gazes out the window at a plane in the sky, then gets up and leaves. The only person to notice is Ted, who looks happy.

INTO THE GREAT WIDE OPEN | Don makes a stop to see Sally, but she’s already left for school. So he gives Betty a shoulder rub (it’s a little weird that it’s not weird, right?) and then drives to Racine, Wisc. Just like that. Along the way, he hallucinates Bert (hi Bert!) sitting in the passenger’s seat, telling him what a stupid idea it is to try to find downer diner waitress Diana in her home state. WHEN YOUR SYPHILIS TALKS, DON, LISTEN.

He winds up at Diana’s house, where he pretends she won a new fridge full of Miller beer. But Diana’s ex’s new wife (played by Sarah Jane Morris, Brothers and Sisters) is the only woman there, and when Diana’s old hubby comes home, he’s ripped to find Don in the living room. The husband (played by MacKenzie Astin, The Facts of Life) follows Draper to his car. “You think you’re the first one who came lookin’ for her?” the husband asks, prompting me to ask, “Good God there are more people who find Frowny McAlleySex alluring?”

So Don keeps driving, eventually picking up a hitchhiker bound for St. Paul. Look for the hippie drifter’s story to dominate the next episode.

RELATED Mad Men Creator on the Speed, Secrecy and Swan Song of His Iconic AMC Drama

ON A ROLL | The episode’s most fun moments, by far, come when Roger and Peggy — both hanging at SC&P’s old offices for different reasons — drink together. She notes that it’s the most attention he’s paid her since she’s worked at the firm, and it’s certainly the longest scene I can recall Elisabeth Moss and John Slattery ever sharing. They talk about how being at McCann will be a challenge for both of them, and how it’ll be good, though they probably wouldn’t have undertaken the change without a push. He gives her a print from Bert’s office — “It’s an octopus pleasuring a lady,” which she argues she can never hang in her new space because it’ll make men feel uncomfortable (sigh) — and somehow they end the evening with him playing an organ and her doing laps around the office on rollerskates. The visual is sublime.

The next morning, Peggy rolls into McCann Erickson, which finally has an office free for her, wearing sunglasses, smoking a cigarette and toting the octoprinty under her arm.