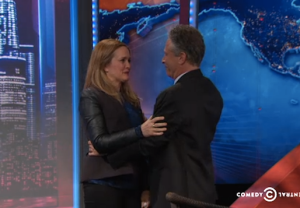 “When you put it that way, it does sound rather arrogant and myopic, narrow-minded and bigoted.” “Good! Then I’ve done my job!”

That exchange between The Daily Show‘s Samantha Bee and a homophobic pastor (about the challenge of “condemning a whole subset of people to hell without getting any blowback”) was just one priceless example host Jon Stewart used to honor Bee’s 12-year run as a correspondent for Comedy Central’s flagship show.

Stewart, who will himself step down from his perch on Aug. 6, bade farewell to Bee on Thursday night’s broadcast, declaring her final episode “the end of an era” and noting she was “the longest-running member of the greatest f—ing news team.”

Bee briefly walked on set after Stewart played her highlight reel, gave a hug to the anchor and waved to the crowd — all while looking a wee bit choked up.

Bee is set to host a new comedy show at TBS, and to executive-produce (along with husband Jason Jones) a road-trip comedy for the network starring Jones and Natalie Zea (Justified).

Press PLAY below to see her farewell video— then share your favorite memories of her Daily Show run in the comments!