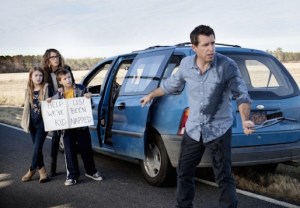 It won’t be a Daily experience, but husband-and-wife comics Jason Jones and Samantha Bee have scored a 10-episode order from TBS for their untitled family comedy.

Yet while The Daily Show favorites are executive-producing the series (and wrote its pilot episode), only one of ’em will star in it.

The series — based on the couple’s own experiences with family getaways — will star Jones as unfiltered dad Nate and Natalie Zea (Justified, The Following) as his wife.

The couple and their two kids — rebellious daughter Delilah (Louie‘s Ashley Gerasimovich) and simpleton son Jared (The Neighbors‘s Liam Carroll) — will pile into their car and embark on a trip to Florida that Nate feels will be “the adventure of a lifetime,” according to the network. “Every leg of their trip, however, is fraught with unforeseen disaster as they encounter one hellish turn after another. Plans call for each season of the show to chronicle a different family adventure.”

In light of the casting, Jones announced on Twitter that he’ll exit his Daily Show gig after nine-plus years:

Production on the new TBS comedy is slated to begin this summer, with the premiere slated for late 2015. The pilot was directed by Steve Pink (Hot Tub Time Machine, About Last Night).

Excited about TBS’ newest comedy? Any suggestions for a title? Hit the comments with your thoughts!