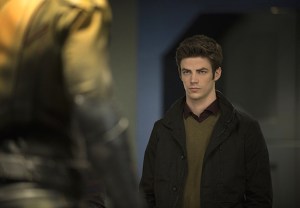 Ross Geller might ask, “What is it, Truth Day?!,” given all that goes down in just the opening minutes of tonight’s The Flash (The CW, 8/7c).

The season finale-caliber hour — though mind you, we actually have another three episodes beyond this — picks up right where last week left off, with slack-jawed Barry, Caitlin and Cisco drinking in their discovery of (as a certain someone dubs it) Dr. Wells’ “time vault.”

Of course, what immediately grabbed the S.T.A.R. Labs snoopers’ attention (after setting eyes on the yellow speedster suit, that is) was the news”paper” headline from the year 2024. Only this time, we get to hear the first few juicy lines of the story about The Flash’s vanishing read aloud. (The published piece, once briefly examined, reveals to the trio at least three interesting Easter eggs, as well as gets Cisco opining about future Barry’s modified running duds.)

Other teasey highlights from “The Trap”:

* To get the goods once and for all on Dr. Wells, Barry comes up with “a really bad idea” — one that their mischievous mentor (unwittingly?) assists with.

* Joe has a flashback to when and how he first met Wells, the context of which will weigh heavy on him as the episode progresses.

* There’s a twist so fantastic, I will leave it for you to experience on your own.

* The Flash learns a new trick that another Tuesday-night drama series sure would find helpful.

* Other Cisco-isms evoke Inception, Dreamcatcher and the second Indiana Jones movie, while Caitlin slips in a pop culture reference of her own as they size up the intricacies of time travel.