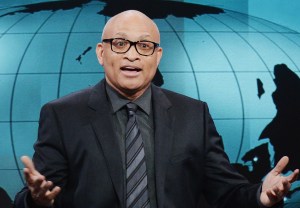 Last Friday’s 20/20 special, Bruce Jenner: The Interview, was widely lauded for its sensitive handling of the former Olympian’s announcement that he is transgender and transitioning to female.

Now, the exact opposite is being said of a Monday night segment on The Nightly Show With Larry Wilmore, in which the host used Jenner‘s brave revelations (i.e. “for all intents and purposes, I am a woman”) to fuel almost eight minutes of mock confusion, outmoded stereotypes and Colin Quinn’s Pinocchio blathering about his own “transition” from puppet to real boy.

Wilmore’s practiced ignorance about transgender issues — and his inability to bring anything fresh or funny to the conversation — seemed especially thudding (and perhaps even transphobic) following Sawyer’s two-hour special. The ABC report, to its credit, included thoughtful information about gender identity, troubling issues plaguing the transgender community — specifically violence, depression and often suicide — and a history of the transgender movement.

Press PLAY below to see the entire Nightly Show segment — then weigh in with your thoughts. Did Wilmore merely fail in his attempt to mine Jenner’s situation for humor, or did he cross a line into offensive territory? Or did Wilmore amuse you — and make you think it’s his critics who need to take a seat? Sound off!