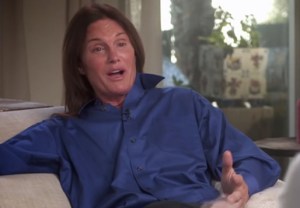 Speculation about Bruce Jenner: The Interview has been on overdrive since the 20/20 special was first announced earlier this month. (Will Jenner reveal he’s transitioning? Will it be handled appropriately?) Within minutes of Friday’s broadcast, we had our answers: Yes and yes.

“I’ve been thinking about this day forever,” the Olympian-turned-reality star began at the top of the hour. “How do I tell my story? … I’m me, I’m a person. This is who I am.”

Within the first five minutes, Diane Sawyer posed her subject with the question on every viewer’s mind, prompting Jenner to say for the first time, “For all intents and purposes, I am a woman.”

Looking back at footage of himself from the 1976 Summer Olympics, Jenner remarked that he was “running away from who I was.”

A particularly telling moment arrived midway through the two-hour special, when Sawyer asked Jenner if he regrets taking part in E!’s Keeping Up With the Kardashians. His answer was pretty amazing:

I had the story. We’ve done 425 episodes, I think, over almost eight years now. And the entire run, I kept thinking to myself, “Oh my God, this whole thing … the one real, true story in the family was the one I was hiding and nobody knew about it. The one thing that could make a real difference in people’s live was in my soul, and I could not tell my story.

It should also be noted that, according to Jenner, this is the last interview we’ll see from “Bruce.” His next interview will take place after he becomes the person he calls “her.”

Beyond Jenner’s story, the special was used to educate viewers about gender identity, troubling issues plaguing the transgender community — specifically violence, depression and often suicide — and to offer a basic history of the transgender movement.

Did you watch Jenner’s emotional interview? Drop a comment with your thoughts on the special below.