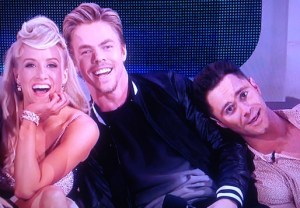 Dancing With the Stars pulled a fast one on us in a number of ways this Monday night.

First, the dreaded double elimination was postponed by one week, taking quite a bit of suspense out of one of the season’s most eventful shows.

Then, in a results shocker that was, perhaps, not entirely unfair but certainly unexpected, one of Season 20’s frontrunners was sent packing in a flurry of tears and hugs from the other contestants.

But that’s enough suspense. Let’s get right to the highlights of Monday’s “Eras Night” broadcast, which found each couple dancing to a style from a particular time period.

BEST OF THE NIGHT | Nastia Liukin and pro Sasha Farber, and pro Derek Hough, kind of (Modern Charleston) — It was pretty clear from the start that this dance had to be the best of the night, given Derek’s devastation that he couldn’t fully participate in the number. (Side note: I can’t be the only one who thought Derek’s injury would be more dramatic than, “I kicked a light too hard, and then got a second injury while going to get ice for the first injury.”) But if the sympathy for Derek weren’t enough to earn a high score, the elaborate subway set and live performance from a top-notch Andy Grammer made the routine impossible to ignore. Nastia seemed a tad hesitant to commit to those lifts — possibly the product of her new partnership — but otherwise, the number was energetic, fast-paced and tons of fun. Check out a short clip from the routine below:

MOST UNDERWHELMING | Willow Shields and pro Mark Ballas (Futuristic Jazz) — Creativity? Check. Awesome costumes? Check. Sufficient content? Check! Still, despite the many boxes that Mark and Willow’s routine fulfilled, I still found myself wanting more. Perhaps it was the choice of music, or the several seconds that Mark and Willow spent getting dragged across the floor (ouch), but there was a distinct lack of energy that normally isn’t missing from this pair’s performances.

MOST ENJOYABLE TO WATCH | Riker Lynch and pro Allison Holker (Quickstep) — Riker’s band, R5, should really consider working more costumes into its shows, now that its frontman has pulled off Captain Jack Sparrow’s likeness and a vintage baseball uniform. (I have no personal experience with either of those get-ups, but I imagine it’s no easy task.) But all that aside, Riker and Allison moved with such ease and an infectious enthusiasm that made each of their (quick)steps a joy to watch.

WORST OF THE NIGHT | Noah Galloway and pro Sharna Burgess vs. Robert Herjavec and pro Kym Johnson (Cha-Cha Dance-Off): This is potentially a cop-out on my end, but these routines were up for points, and not many of the evening’s other performances stood out as truly difficult to watch — a good thing, of course! But this dance-off found both pairs clumsily stomping through their cha-chas, with little fluidity and a clear lack of confidence in both Noah and Robert.

Still, the performers who were at their weakest on Monday night weren’t the ones in danger of elimination. Here are the full results:

“Can I not be a TV host for a minute and just be a dad?” Tom Bergeron asked, before pulling an emotional Willow into a hug (one of a zillion she’ll get before the night is over, I imagine). Mark, meanwhile, thanked Willow for their weeks in the competition, reassuring the 14-year-old that he did it all for her. (Awww.)

With that, I hand it over to you. Were you surprised by Willow and Mark’s elimination? And who’s on track to win the whole shebang? Hit the comments!