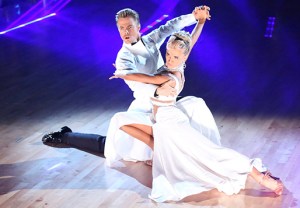 One of Dancing With the Stars‘ strongest frontrunners has been thrown a major curveball.

Derek Hough — who, with partner Nastia Liukin, has consistently scored well in Season 20 thus far — has suffered foot and ankle injuries that could make him sit out the rest of the season.

“While rehearsing for the 10th Anniversary Dancing with the Stars television special Monday night in Los Angeles, Derek Hough suffered injuries to his right foot and left ankle,” a rep for Hough told E! Online Wednesday. “He has been diagnosed with a broken toe on his right foot and sprains to his left ankle on both the inside and outside aspects and a bone bruise on the same ankle.”

The statement continues: “While it remains unclear at this time if Derek will be able to perform on the Monday, April 27 episode of Dancing with the Stars, his partner Nastia Liukin will train in Los Angeles this week with pro-dancer Sasha Farber to prepare for the live show.”

Hough was also forced to sit out Dancing‘s 10th anniversary special, which was taped Tuesday for broadcast on April 28.

He and Liukin have had to contend with a tough rehearsal schedule all season, as Hough has simultaneously performed in the New York Spring Spectacular at Radio City Music Hall.

Per the Spring Spectacular web site, Hough’s role “will be played by Taylor Frey until further notice.” A DWTS rep has yet to comment on Hough’s status.

Bummed to hear this Dancing news? Hit the comments!