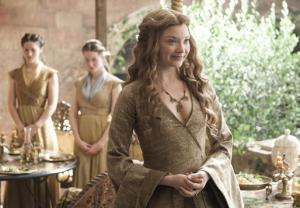 Westeros weddings tend to be gruesome affairs. But the carnage kicked off by Margaery and Tommen’s wedding in this week’s Game of Thrones is shaping up to prove even more devastating than the Red Wedding and Joffrey’s Pigeon Pie Deathapalooza combined.

Well, for Cersei, at least.

Because even though the queen mother thinks King’s Landing bends to the whims of her prettily coiffed head, the episode makes it clear that the new queen has designs on — and the wherewithal for — ruling as she sees fit.

It’s really too bad that Oberyn Martell couldn’t carry Margaery into the ring last season: Just one of the new queen’s pleasantly delivered, whetstone-honed barbs could’ve cut The Mountain down to a whimpering, red-faced little molehill.

But I digress. Let’s take a look at the action — Sansa betrothed! Tyrion kidnapped! — that takes place in “High Sparrow.”

PHOTOS Quotes of the Week From Gotham, Game of Thrones, iZombie and More

HOUSE LANNISTER | Tommen and Margaery’s wedding is carried off with far less fanfare than her previous one, but the groom survives the day, so huzzah! As they face their guests for the first time as man and wife, Marg looks her usual resplendent self and Tommen — who’s never shared his bed with anyone other than Ser Pounce — looks that special mix of terrified and excited that only an adolescent boy in the presence of impending de-virginizing can manage.

Cut to their bedroom later that night, with the boy king sucking wind like he just sprinted for a bus and the new queen satisfied… by the knowledge that she can play him like “The Rains of Castamere.” “It all happened so fast,” he wheezes. “This is all I want to do, all day, every day, for the rest of my life.” (Ha!)

While the poor thing catches his breath, the newlyweds talk about their new titles. “Does ‘Queen Margaery’ sound strange to you?” Tommen asks innocently. What she says: “So strange.” What she means: “Bow down, bitches.” 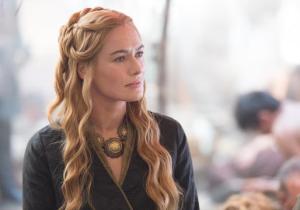 The new queen wastes no time; no sooner has she subtly suggested that perhaps Cersei won’t always live in King’s Landing than Tommen is telling his mother that he wants her to be happy, and “Wouldn’t you be happier in Casterly Rock?”

You’d better believe that Cersei Lannister isn’t going out like that. She beelines it to her daughter-in-law’s quarters, where Margaery is recounting the farce that was her wedding night, to the mirth of her handmaidens. What follows is one of the best things you’ll see on TV this week. Tommen’s mom and wife trade increasingly devastating barbs; Cersei seems to deflate a little with each one, while Margaery rides so high from the exchange, she’s about to enter orbit. My favorite line from the scene: Margaery’s “I wish we had some wine for you. It’s a bit early in the day for us.” Golden arbor BURN!

Thank goodness Cersei has something to distract her: When the Sparrows bust the High Septon during a very involved sex game in Littlefinger’s brothel — and then parade him naked through the streets — he lobbies the dowager queen (heh) for help. Nice try, priest: Cersei has him stashed in the dungeon, then visits the Sparrows’ leader in a stinky, poor section of the city. The High Sparrow is a disheveled, shoeless man dishing soup out to his faithful, and he and Cersei work out a tentative alliance. “The faith and the crown are the two pillars that hold up this world,” she purrs. “We must do everything necessary to protect one another.”

HOUSE STARK | Arya’s been spending her time sweeping the House of Black and White, which is good, because a guy who drank from a pool inside the house just keeled over on the floor. No one will answer Lady Stark’s questions — Did that guy just die? Who’s this “many-faced god” Jaqen mentions? And why haven’t the face-shifting lessons begun yet? — but another girl in the house seems to have at least a mild dislike for her, so there’s that. While in Arya’s sleeping area, Jaqen notes that “all of Arya’s Stark’s things” surround her: To truly be a faceless man, a girl must ditch that ish. So she dons the same dress as her nameless contemporary at the house, then tosses her clothes and belongings into The Shivering Sea — all except for Needle. The thought of losing her beloved swordlet brings tears to Arya’s eyes, so she hides it under a bunch of rocks. Oh Arya, a man has seen through every damn thing you’ve done so far. What makes you think this will work?

Far away, Littlefinger, Sansa and their entourage pause on a bluff. She recognizes Moat Cailin — the northern stronghold the Boltons took by force — and understandably starts to freak the flay out when Baelish casually drops that she’s going to marry Ramsay Bolton (aka the sadistic creator of Reek). Even though Sansa’s not privy to her betrothed’s proclivities, she knows enough about the family — Roose killed her brother, Robb; the Boltons are besties with the Lannisters — to balk at such an arrangement. And even if she didn’t have a problem with all of that, the fact that the Boltons have decorated the place with flayed corpses is probably a bit of a red flag. (Seriously, it looks like the staging area for Bodies: The Exhibition up in this piece.)

Littlefinger cunningly makes it seem like she has a choice in the matter. “You’ve been a bystander to tragedy from the day they executed your father,” he says. “There’s no justice in the world, not unless we make it. You loved your family. Avenge them.” A nice sentiment, but silly Sansa: You NEVER have any good choices. Regardless, she turns her horse toward the outpost and pastes on a smile when she’s introduced to her future hubs. Theon/Reek, meanwhile, recognizes Sansa but says nothing. 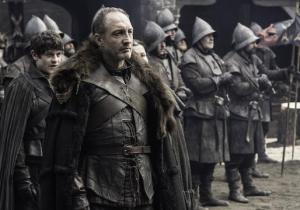 Another time Theon/Reek says nothing: When he’s privy to the Bolton men discussing how they don’t have enough men to hold the north if the other houses rise against them, and how they can’t count on the Lannisters, who’ve never sent forces that far north. Sansa and Ramsay’s nuptials, Roose explains, will strengthen Bolton’s forces by allying them with the most revered name in that part of the land: Stark. And it seems he may be right: When a maid leads Sansa to her room, the older woman softly says, “Welcome home, Lady Stark. The north remembers.”

Meanwhile, Brienne and Pod are following Littlefinger & Co. at a distance. One night around the fire, she apologizes for always snapping at him, then promises to teach him the proper way to wield a sword. The atmosphere is such that she feels comfortable answering his question about how she ended up serving Renly. The short version: He was exceedingly nice to her at a ball her father threw for her potential suitors, dancing with her when all the other boys played a nasty prank on her. “He saved me from being a joke that day until his last one. And I couldn’t save him in return,” she says softly, vowing to avenge him. (Side note: Damn, Gwendoline Christie kills it here. Reminds me of Jaime’s bathtub monologue. So finely done.)

THE MEN OF THE WALL | Jon Snow’s first order of business as new Lord Commander of the Night’s Watch? Give Stannis the subtle heave-ho; after all, there’s only so much food to go around, and Baratheon’s troops are gobbling up a bunch of it. Second on the To-Do list: Dish out new assignments, like naming the defeated Alliser Thorne First Ranger (which he accepts) and offering Janos Slynt another command (which he vociferously and rudely rejects). (Side note: Anyone else notice Olly, Jon’s new steward, pick up his head like “What?!” when Janos was being an idiot? Watch it there, old man; as Ygritte can tell you, you do not want to cross that kid.)

Much like Daenerys last week, Jon then must decide what kind of ruler he wants to be. Also like Daenerys: He decides to be a brutal one. So with Stannis looking on approvingly and Janos blubbering his apologies with his neck literally on the chopping block, Jon raises his sword and lobs off the cowardly brother’s head. At least he did it himself, like Ned taught him.

HOUSE LANNISTER: ON-THE-ROAD--ALWAYS EDITION | Despite Varys’ protests, Tyrion throws a scarf over his head and successfully lobbies for a day out in Volantis. While strolling through a slave market, they see a red priestess preaching to a rapt crowd. Tyrion mocks her from a distance… until she turns and pierces him with her gaze. He beats it out of there quickly, winding up at a brothel featuring an employee who strongly resembles Daenerys… if the Mother of Dragons were prone to walking about in a butt-less blue gown. Oh, what a coincidence: Ser Jorah is there, too, drinking heavily! (Side note: I don’t want to know how many times he’s paid Faux Khaleesi to fondle his dragon eggs.) Tyrion talks a good game with another one of the ladies, but when she makes to lead him away, he gets choked up and just can’t do it. He steps to a balcony to pee off the edge, and that’s when Jorah sneaks up behind him, slips a rope over his body and a gag into his mouth. “I’m taking you to the queen,” the older man growls.

Now it’s your turn. What did you think of the episode? (That’s totally The Mountain under the sheet in the maester’s workshop, right?) Sound off in the comments!