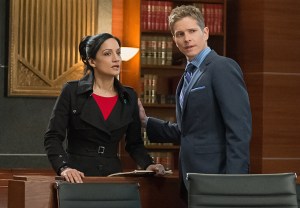 If the number of gray hairs on your head has increased tenfold since last September, feel free to blame it on The Good Wife showrunners Robert and Michelle King.

“That was absolutely our master plan,” says Michelle King, with a laugh, when asked about the show’s stressful sixth season. Indeed, in its most recent episode alone, the CBS drama found Alicia being forced to resign in disgrace from her hard-won State’s Attorney post, Cary offering to testify against dangerous drug kingpin Lemond Bishop, and Kalinda and Diane throwing themselves at the mercy of the court with regard to the altered metadata they used to free Cary from jail.

Heading into the final three episodes of the season (starting Sunday, 9/8c on CBS) with so much potential upheaval — and knowing that Kalinda’s portrayer Archie Panjabi won’t be returning for Season 7 — has only increased viewers’ anxiety levels. TVLine caught up with the Kings to get some nerve-soothing intel (and spoilers!) about the boot-ilicious investigator’s fate, the possibility of Peter’s role in Alicia’s downfall, and the romance forecast for Illinois’ first lady.

TVLINE | What can you tease about Kalinda for Season 6’s final three episodes? To me, there’s something about her that seems a little bit worn down of late.
Robert King: Yeah, I know. 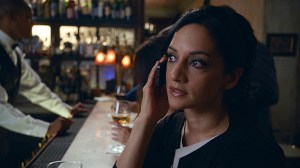 TVLINE | Like when Wiley said, “You fixed the metadata,” usually Kalinda’s three steps ahead in a situation like this. Recently, though, it feels like something has taken the wind out of her sails.
Michelle King: She’s had to deal with the fact that the people she cares about the most really have been struggling this season. Cary being in prison, Alicia having her problems with the election, Diane getting caught up with the metadata. I mean, here she is trying to rescue everyone, and it’s just coming at her from too many sides.
Robert King: Hopefully, what you see is a renewed Kalinda. Obviously, everybody knows we’re heading towards a divide of some sort, because Archie’s leaving the show, but also Kalinda is in deeper water than she’s ever been before. The real question is whether she brings herself back from the exhaustion you correctly pinpointed, and that, I think, is true. Archie is always the most fun as an actress when she does that — when you see that spark in her eye, like, “OK, now I know what I need to do.”

TVLINE | I brought this up the last time we talked, but it bears asking again: People are hungry for some Kalinda-Alicia reconnection before Archie exits the show. They haven’t shared the screen together in a long time. Is that something to look forward to in these final three episodes?
Robert King: You know what? That is one of the things we’d rather hold close to the vest. [Laughs]
Michelle King: Yeah, stay tuned.
Robert King: Because there is so much known about Kalinda’s exit, as opposed to when Josh Charles was exiting, we want to hold onto the few twists that we have. 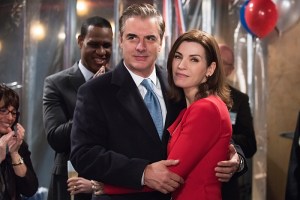 TVLINE | OK, shifting to a different storyline, a lot of our readers commented on my recap of your last episode (“Winning Ugly”) about the possibility that Peter might be somehow be involved in Alicia having the State’s Attorney position yanked out from under her. Is there merit to that, or is it a completely crazy theory?
Robert King: I saw that, too, and why that theory is interesting is because on Election Day, it looked like Peter was working against her. In other words, it doesn’t have to be conspiracy to be psychologically interesting, because there is something in Peter that wants to be the winner. Can we not say anything more than that?

TVLINE | Fair enough. Speaking of Alicia — let’s talk about her love life. She planted one on Johnny, they had their little dalliance, and now he’s left the state. We saw her get a little disappointed that Finn is dating someone else. Where does she stand in her personal life?
Michelle King: What we’ve see this season of Alicia is a thawing out of the chill she experienced after Will’s murder, but she has not committed to anything. She was willing to tiptoe around the idea of having some fun, but it never went deeper than that.
Robert King: With Will, the problems seemed to be almost lined up against her, like it was fate, that the timing was never right. She’s discovering this year that she’s part of the problem. She has an attraction to bad boys that may then keep her from going to someone who’s right for her. Whether Finn is right for her is a question viewers have, and did she go in another direction because there’s something in her that pulls her away from true happiness?

TVLINE | Interesting.
Robert King: Anyway, that was just one of the theories that one could apply. 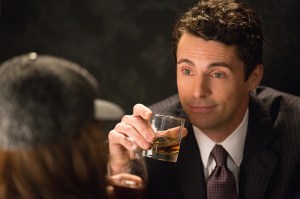 TVLINE | Speaking of Finn, is there any update on Matthew Goode’s status for Season 7?
Can we leave that a little open at the moment? We’re lining up casting for next year, and not all the Ts are crossed and the Is are dotted yet.

TVLINE | So, professionally, with Alicia no longer able to continue as State’s Attorney, is it going to be awkward for her to return to Florrick-Agos-Lockhart? Negotiations there were getting pretty ugly — and I have to say that, as a viewer, seeing Alicia not get along with Diane and Cary is upsetting. How bad is that going to get?
Michelle King: We’ll be looking at that through the rest of the season.
Robert King: Yeah, you’re going to find that come up right in the next episode. You put your finger on a lot of the outstanding issues on the law firm side with Alicia.