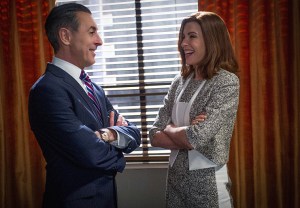 It’s funny that this week’s installment of The Good Wife makes multiple references to Spider-Man (and its head-scratching number of reboots). Because as Alicia Florrick so cruelly learns, it can be a silly and treacherous thing to place one’s fate in a white knight upon a fiery steed.

If you’ll recall, at the end of last week’s hour, Alicia found herself accused of election fraud by TV journalist Petra Moritz. And this week, she puts an imprudent amount of trust in the hands of famed political attorney Spencer Randolph (Alias vet Ron Rifkin), who takes on her case under the noble guise of upholding the democratic process — but turns out to be nothing more than a rook in the Democratic process of election malfeasance.

Meanwhile, Kalinda’s misdeeds in clearing Cary of trumped-up charges by the State’s Attorney’s office come back to haunt her — but also result in lost sleep for Diane, Cary, David Lee, Finn Polmar and pretty much everyone else with knowledge of a case in which everyone did at least a little wrong (while thinking they were undeniably right).

With that said, let’s recap the action from “Winning Ugly”:

WITNESS FOR THE PROSECUTION | This week, it’s Diane’s turn to be confronted by State’s Attorney investigator Andrew Wylie — and she’s stunned/angry/hurt to learn she presented to the court metadata faked by Kalinda in Cary’s defense case (even if Kalinda never meant for said metadata to see the light of day). David Lee insists her best option is to go before the police review board and admit to everything — which is exactly what Diane and Kalinda wind up doing. Yet while the judge in ASA Geneva Pine’s appeal marvels that “The Cary Agos case — there’ve been more remakes of this case than Spider-Man,” he also sees there’s fire where the smoke is rising.

Kalinda refuses to let Cary take her case — insisting she needs someone who’s not emotionally involved (i.e. Finn), but in the end, while Geneva admits her office’s case against Cary was mishandled, she rightly points out their pursuit of Lemond Bishop was just. And so she makes an offer — drop the case against Diane, but with a high price. She’ll have to testify against Bishop. “Here we are back again – right at the beginning,” sighs La Lockhart. But when Kalinda begins to consider the deadly notion of officially turning against Bishop, it’s Cary who decides to take the (proverbial? literal?) bullet, begging Geneva to turn down Kalinda’s inevitable offer to become her star witness, and instead allow him to be the key witness in bringing down Chicago’s biggest drug dealer. OK, now I’m willing to second Diane’s motion: “Here we are back again – right at the beginning.” Just please, no scenes of Cary in a darkened lockdown cell, OK? (My heart isn’t strong enough, people!) 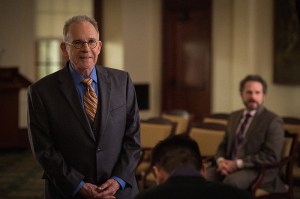 THE ONE WHERE ALICIA WINDS UP SOBBING IN PETER’S ARMS | The Illinois election board follows up on claims that Alicia committed election fraud — specifically looking into evidence of a microchip found inside a voting machine that, it turns out, can switch votes from one candidate to another. Alicia is too awestruck by legendary Spencer Randolph volunteering to take on her case to look deeper into his motives, and the dude turns out to kill it in front of the board — although things take an ugly turn when he suggests said chips had more to do with Peter stealing the governorship than with his client’s current situation.

The Illinois Democratic party chairman — who’s always been one of the show’s most dislikable fellas — finally insists Alicia walk away from the office she won fair and square — because it turns out said microchips were actually used to rig the election…not for her but for a race that keeps her party in the super-majority in the state senate. And when Alicia shoots down a “generous” consolation prize of being put on the state gaming commission, the party boss tells her she’s about to get “destroyed.” “Oh my God, did that just happen?” asks Alicia, but she’s got to know the system well enough to not be entirely surprised such horrors are actually real.

She goes to Randolph and tells him she wants to win, that she’s not going down without a fight. And what does the old legend do? He tells the election board that he’s learned Alicia is guilty as charged, that the voting machines were hacked at her discretion, that she indeed committed the “high crime of stealing this election.” I consider myself enough of a Good Wife superfan not to let myself be shocked by anything anymore — but I’ll admit this twist had my jaw picking up fibers from my living-room carpet. “Be a good Democrat. Step down now. Everybody wins,” Randolph tells her coolly. But with Alicia and the state’s most powerful man (AKA her hubby) now fighting from the same corner, let’s not call this a TKO quite yet. 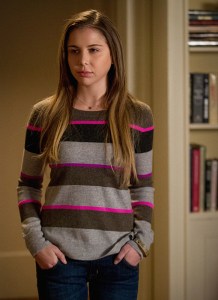 THERE BUT FOR THE GRACE OF GOD… | Alicia has no qualms lying to the public about those leaked emails between herself and Will — this week’s doozy, “I need you. I need you on top of me.” — calling them an unfortunate flirtation. But, alas, Grace is now old enough that she can’t be shielded from media ugliness — or the truth – leading to a brilliant and heartbreaking showdown that’s presented so matter-of-factly it’s hard to know how to feel when it’s over:

It’s telling that Alicia is the one who winds up asking her teenage for a hug: She knows her behavior isn’t perfect here — and yet at the same time, she respects that her daughter is no longer a child, exactly, and deserves some honesty, no matter how painful. Will it ultimately screw up Grace to know her parents are keeping alive a sham marriage for political purposes? Or will the truth set her free to pursue a less cynical path? Only time will tell — but here’s hoping Robert and Michelle King keep exploring the most unflinching parent-child relationship on TV. (If only they could bring MIA Zach back into the mix, too. Please tell me he and Alicia are on speaking terms — even if we haven’t seen it with our own eyes, right?)

On that note, I turn things over to you. What did you think of “Winning Ugly”? Were you as blindsided as Alicia by Spencer Randolph’s agenda? Who’s most at risk: Alicia, Kalinda, Cary or Diane? And how do you think the show will handle the exit of Archie Panjabi’s character? Sound off in the comments!