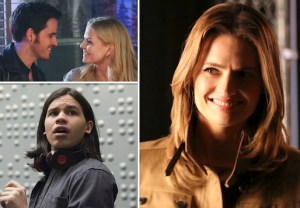 Will Castle leave fans hanging from a cliff? Will Once Upon a Time‘s Hook be able to scale Emma’s new walls? Is The Flash starting to feel the Vibe? Is Big Bang in fact heading for a wedding? Read on for answers to those questions plus teases from other shows.

We know Hollander’s Woods is going to come back into play for Castle in the Season 7 finale. However, what mythology might we be dealing with in regards to Beckett? –Rachael
To be clear (since some are CoNfUsEd), the actual Hollander’s Woods incident from Rick’s childhood is one focus for the finale. As series creator Andrew W. Marlowe, who wrote the episode, explains, “One of the areas we haven’t explored is why Castle became a mystery writer. Was there something that created a fascination with murder and with death and with bodies? And Hollander’s Woods was an event that happened when he was a kid that altered who he was…. It has nothing to do with why he vanished, but it does tap into a deeper Castle mythology.” As for the Beckett half of the finale, “We’ve been building this storyline for Beckett where she’s feeling a little bit like she needs to do something more, something a little bit bigger…. Where does she go with family? Where does she go with her career?” Marlowe posits. “So she’ll end up facing some choices in this that are a little bit unexpected, that may change the trajectory of where she’s going.”

Is there any news on the status of Castle Season 8? –Alie
TVLine keeps no secrets, Alie. But even on the off chance the ABC drama doesn’t get picked up, the finale won’t leave folks hanging terribly much. “It was a bit of a challenge to craft a [finale] when there was so much uncertainty about the show’s future, with our [actors] in negotiations, not knowing if we’re coming back and all that sort of stuff,” Marlowe shares. “We were trying to craft a show that had a satisfying conclusion if it is indeed the conclusion, but also some really great, interesting, compelling springboards into next season’s storytelling — if the gods shine upon us and we’re allowed to continue.”

Any Big Bang Theory scoop on Penny and Leonard? —Joshua
As hinted in our freshly-updated May Sweeps preview, Sheldon forces the engaged couple in the May 7 season finale to confront the truth behind their non-existent wedding date. “Penny and Leonard would tell you the reason is she’s busy with her new career and things are really great between them and they’re in no rush,” explains exec producer Steve Molaro. “But, underneath it all, what’s the real reason? That all comes out.” And what’s the real creative reason behind the duo’s slow march to the alter? “The show has always been Leonard and Sheldon, our single bachelors living in that apartment,” reasons Molaro. “But we’re going right into the heart of that at the end of the season.”

Do you have any scoop on Once Upon a Time‘s Hook and Emma? That would be great! – Jillian
As one might wisely surmise, Emma’s increasing darkness won’t only damage her dynamic with the ‘rents, it could also throw cold water on her first real romance in a while. “It impacts everyone,” series co-creator Adam Horowitz previews. “It’s the kind of thing where it puts Emma in a situation where she could be feeling isolated from those she loves and who love her, and those people are fighting to break through walls that are starting to come up again.” Even more ominous, the EP notes, these new walls “are even stronger and more difficult to surmount than the ones she had up when the series first began.” Bonus teaser: In Sunday’s episode “Lily,” “Emma comes face to face with her childhood friend” — aka Mal’s long-lost daughter, played by Agnes Bruckner — “and sees what their divergent paths have wrought on both their futures. It’s puts them in pretty direct conflict.” 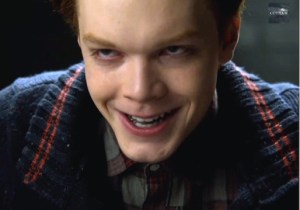 Like, is there any chance Cameron Monaghan (Shameless) will be returning as Jerome? He was absolutely mesmerizing, would be great to see more of the character. –LB
To remind the others, Monaghan appeared in the circus-themed February sweeps episode, as the strongest candidate yet for a would-be Joker. Show boss Bruno Heller tells me the Joker storyline – be it about Jerome or someone else – will not be revisited before the season is over, but will “feature heavily in Season 2.”

Hey, I need some scoop on The Originals‘ Klaus and Hayley. I love their chemistry and dynamic and would like to know if there is a chance for some romance between those two later on? — Fallon
Hey, Klaus and Hayley’s relationship is definitely a major plot point in the season’s final three episodes, but I wouldn’t exactly throw around words like “romance.” Per exec producer Michael Narducci, Klaus’ “increasingly ruthless demands” over how they should protect baby Hope will actually put him further at odds with the mother of his child. “Hayley will come to realize that she has to protect Hope her own way,” Narducci says — even if that means distancing herself from the child’s father.

Anything on the upcoming crossover between SVU and Chicago P.D.? –Jennifer
P.D. star Jason Beghe acknowledges, “There’s obviously something there” between Voight and SVU‘s Benson. “People tend to read, ‘Oh, that must mean romance,'” he says. “But I don’t know. We’re very simpatico. We have a warmth and a respect and an interest in each other. Also, just being the heads of units, there’s a certain safety and understanding and comfort just having somebody appear to relate to.” Besides, Voight might still not be ready to move on from his last serious relationship. “I never saw him as a guy who ever cadded around,” the actor says. “He was deeply in love with his wife, she died, and I don’t see him not still being deeply in love with her.”

Any scoop on Orphan Black? –Mary Kate
Among Tatiana Maslany’s many on-screen personae, co-creator John Fawcett says that Tony won’t necessarily put in an encore this season – “and not because he got a mixed reception, but because I don’t know that we’ve completely determined how to incorporate him again. I want to see Tony again. I just don’t know if we’re going to see him in Season 3.”

Is The Flash going to explain how Cisco was able to “see” his death in the other timeline? –Gerry
The answer may lie in Cisco’s own “super” fate, as the DC Comics character known as Vibe. As exec producer Andrew Kreisberg explains, “We all know that Vibe’s powers are derived from the powers that separate the dimensions. And alternate timelines can be considered alternate dimensions. So, it’s not the worst inference anyone could make.”

All the way from London, UK:

Any news on Arrow? Literally anything! I’m having withdrawal after this week’s episode. –Naeha
It doesn’t take superpowers to arrive at this conclusion, but let the romantic record show: Ray and Felicity are “pretty well and truly kiboshed,” showrunner Marc Guggenheim affirms. “They do have a very meaningful exchange in Episode 22, but we’re not going to do an on again/off again thing with them.” That said, the EP notes that the aforementioned scene is such that “I have to remind myself that they broke up, because regardless of who you ‘ship… there’s a lot of chemistry between Brandon [Routh] and Emily [Bett Rickards]. It’s just the way those actors are in a scene together.”

Please, please, pretty please tell me we are going to see more of Bradley James’ Lowell [Casey] on iZombie? –Brandi
As you saw this week, he with whom Liv has locked pasty lips isn’t going away just yet. Says show boss Rob Thomas, “We knew from the moment we saw Liv and Lowell on screen that Lowell wasn’t going away any time soon.”

I have a question 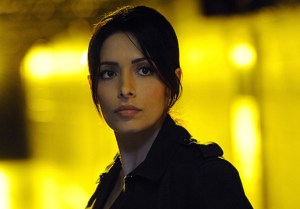 about Person of Interest: Is Sarah Shahi going to return as Shaw? –Russ
I asked the showrunners for an update when I saw them at last week’s Paley event, and their handshake agreement with Shahi remains in place. “Our deal with Sarah is that when she’s excited to come back, we’re excited to have her,” Jonah Nolan said. And if/when the new mom of twins gives her bosses the nod, “We have a killer storyline for how her character comes back into the universe of our show. We’re ready to roll with that just as soon as she is.”

Do you think we will see more of Anna Deveare Smith on black-ish, since Nurse Jackie is ending? If yes, how much? –Ryanna
This much I can confirm: Smith will be heard, if not seen, in the next episode, in which Zoey’s mini-rebellion phase leads Bow to react with a softer approach, as her own mom did with her.

That last episode of Stalker was great. Got any scoop on the show? More specifically, how Beth is going to get away from Ray? Or the survival of Ben? –Brandi
Series creator Kevin Williamson won’t reveal too much about what’s on tap when the freshman drama resumes its run this Monday, but does tell the Inside Line that Episode 18 “will be a thrilling showdown between Beth and Ray, and Ben’s fate will be revealed.”

Real questions, real answers. If you need the Inside Line on a favorite show, email InsideLine@tvline.com!  (With reporting by Vlada Gelman and Andy Swift)