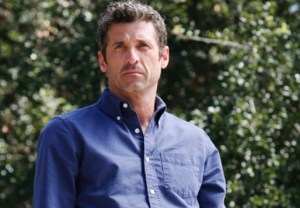 The following story contains spoilers from this Thursday’s Grey’s Anatomy. Proceed at your own risk…

In a shocking development that ranks among Grey’s Anatomy‘s most tragic twists ever, Derek Shepherd died in Thursday’s episode after getting broadsided by semi. The catastrophe leaves Meredith (played by Ellen Pompeo) a widow and marks the end of an 11-year journey for Patrick Dempsey.

“It’s been a remarkable ride,” the actor tells TVLine, exclusively. “The worldwide impact has been extraordinary. It is incredible how devoted and passionate the fans are, and I will forever be grateful and humbled by the experience.”

Derek Shepherd is and will always be an incredibly important character — for Meredith, for me and for the fans. I absolutely never imagined saying goodbye to our ‘McDreamy.’ Patrick Dempsey’s performance shaped Derek in a way that I know we both hope became a meaningful example — happy, sad, romantic, painful and always true — of what young women should demand from modern love. His loss will be felt by all. Now, Meredith and the entire Grey’s Anatomy family are about to enter uncharted territory as we head into this new chapter of her life. The possibilities for what may come are endless. As Ellis Grey would say: the carousel never stops turning.

Lastly, ABC issued a statement of its own addressing Dempsey’s departure.

After 11 seasons on Grey’s Anatomy, Patrick Dempsey is moving on to pursue other interests. Dr. Derek Shepherd is an iconic character and we’ve been proud to be the home of ‘McDreamy’ and the ‘Mer/Der’ love story. The devotion of Grey’s fans throughout the years has been a testament to the creative mind of Shonda Rhimes and Dempsey’s talent. ‘McDreamy’ will be greatly missed and we wish Patrick the very best in his future endeavors.

What say you, Grey’s fans? Are you grieving along with Meredith? Hit the comments!