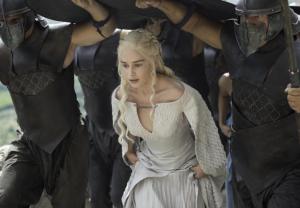 Yes, yes, Game of Thrones is all about climbing to power and ruling the land. You play or you die. Power resides only where men believe it resides. Yadda yadda.

But here’s a salient question: After watching what happens to khaleesi/mhysa/queen Daenerys in this week’s episode, for the love of the old gods and the new, who would want such an insane responsibility?

We’ve seen corrupt leaders during our time in the seven kingdoms. Their blatant grabs at power, coupled with their indefensible deeds, have meant that we haven’t felt that bad when they’ve been served their just desserts. (Joffrey’s offing we downright cheered.)

But the struggle Daenerys goes through this week’s episode, the wanting to do good, be just, accrue power and keep the peace while being tempted by the glory of it all? It’s enough to make you want to box yourself up in a crate and set sail for somewhere far, far away.

HOUSE TARGARYEN | After Daario and Grey Worm track down the Sons of the Harpy member who killed the Unsullied in the brothel (the Slightly Sullied?) last episode, Daenerys must figure out what to do with him. She gathers her counselors, who include a former Meereenese slave, a former master, Daario and Barristan Selmy.

The slave wants the prisoner to die a painful death, but — staying true to what he said when they first took the city — Selmy advises that Dany hold a trial instead of just offing the man. He goes as far as to pull her aside to relate how her father’s attempts to stamp out dissent put terrible things in motion. “The Mad King gave his enemies the justice he thought they deserved,” he says gently, not needing to point out that she’s about to do the same. Looking chagrined, Daenerys agrees to a trial.

But that all becomes inconsequential when the slave slips down to where the Sons of the Harpy member is being held and kills him, then leaves his body in a public place as a warning to others. Now, Daenerys must figure out how to handle this public-relations nightmare, when you know she’d just rather pin up those braids and slip into the nearest bathtub while Daario soaps her back.

But the Mother of Dragons pulls it together, gathers the people of Meereen and announces that the punishment for the former slave’s actions is death. The people cry for mercy, and Daenerys clearly is conflicted over her decision, but she doesn’t change her mind. So Daario draws his curved blade and lobs off the former slave’s head.

That sets off a revolt that begins with everyone hissing at her (it sounds like Parseltongue day at Slytherin) and quickly escalates to them throwing rocks at their formerly beloved mhysa. The Unsullied protect her with their bodies and shields she’s hustled away from the crowd and, if you’re trying to draw a parallel to Joffrey & Co.’s unfortunate day out and about in King’s Landing, Game of Thrones, you succeeded. 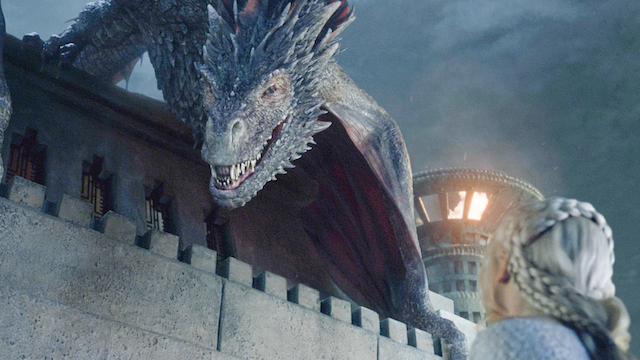 Later that night, a bereft Daenerys dismisses her attendants and stands out on her terrace, probably wishing she’d choked to death on that heart Khal Drogo made her eat way back in the desert. But then she hears a sound behind her, turns and sees… Drogon on the roof! And he doesn’t try to eat her before he flies away! Day saved!

HOUSE STARK | Arya sails into Braavos and makes it to The House of Black and White — “that is where you’ll find the man you seek,” a helpful guide informs her — but is denied entrance by an unsmiling man who answers the door. She pulls out her coin and drops the name of Jaqen H’ghar, the Faceless Man who gave it to her in Season 2. Still, no dice. “I have nowhere else to go,” she protests. “You have everywhere else to go,” he answers, shutting the door.

Arya sticks around for a while, repeating her kill list (which no longer includes The Hound, you’ll note), then hucks her coin into the bay and explores the city, hunting pigeons to survive. When some young men give her trouble, the Black and White doorman appears — and the hooligans can’t run away fast enough. She follows him back to the house, where he returns the coin she tossed, then reveals himself as the man she knew as Jaqen H’ghar — but he maintains that “a man is not Jaqen H’ghar.” Who is he?, she demands, awed. “No one,” he says, gesturing her inside. “And that is who a girl must become.”

In an inn very far away, Pod perks up a dejected Brienne by pointing out that Sansa and Littlefinger are sitting mere tables away… flanked by a lot of knights. But when Brienne makes a very dramatic recitation of her oath to protect Catelyn’s daughters, Sansa is spooked and refuses her help. Then Lord Baelish has his men try to detain Brienne (as if!), and the whole thing ends with a horseback chase in which Brienne kills a knight gunning for Pod. With her mission revived, the rejuvenated knight sets out to rescue Sansa from her cunning keeper. Atta girl!

HOUSE LANNISTER | Gods, being Cersei Lannister must be exhausting. In between all of the wine-drinking and brother-loving, she’s got to surreptitiously rule the realm until Tommen is fit for more than drinking juice boxes and engaging in naptime. First, she summons Jaime to witness the very upsetting package she’s just received from Dorne: It’s a snake (sculpture? taxidermied? What’s your take?) with Myrcella’s necklace hanging from its fangs — a clear threat to the Lannisters, whom the Dornish ruling family blame for Oberyn’s recent death and Elia’s long-ago one. (A brief scene in Dorne, though, shows us that while Ellaria is gunning for the nuclear option re: the Lannisters, Oberyn’s brother Doran — the Dornish leader too frail to make the trip for Joffrey’s wedding, you’ll recall — has a far less hawkish take on the matter.)

Jaime quietly shuts down his sister’s hysterics by stating he’ll go to Dorne to get their daughter back. She’s skeptical of the prospects of a one-handed man, flying solo. Jaime shoots back that he won’t be alone. Cut to a dandied-up Bronn walking with his betrothed near her family’s castle… and Jamie sitting on a rock nearby. (Side note: That leather jacket tho. If I were Bronn, I’d gladly go anywhere Jaime bid me.) After sending the lady away, Bronn maintains that he made a deal with Cersei. “I would have advised against that,” Jaime deadpans, announcing that Bronn’s fiancée is now someone else’s bride-to-be and that if the sellsword does as he’s asked, he’ll get a better girl and a bigger castle as a reward.

Far away, on the road to Volantis (and onward to Meereen), Tyrion drinks, kvetches and gets maudlin when he thinks about the time Shae asked him to leave King’s Landing with her. He didn’t, he recalls, “’cause I liked it, power, even as a servant.” (And in case you like to torture yourself, I’ll just leave this here.)

THE MEN (AND FRIENDS) OF THE WALL | Stannis summons Jon Snow and they neatly outline the political situation at The Wall: The free folk/wildlings won’t ever follow anyone but one of their own, the northern part of Westeros is loyal to the Starks, and Alister Thorne is likely to be elected the next Lord Commander of the Night’s Watch. Stannis knows he needs a Stark (or the next best thing) on his team, so he proffers a deal: If Jon bends the knee to him, “you’ll rise as Jon Stark, Lord of Winterfell.” (Oh, Kit Harington’s face at that moment is perfection.)

Legitimization is “the first thing I ever remember wanting,” Jon confesses to Sam in a rare unguarded moment later. Still, he plans to refuse the offer, citing his lifelong vows to the Night’s Watch. I guess when it’s not a comely redhead goading you to break that oath, temptation is a lot easier to resist, eh Snow? (Too soon?)

At the elections that evening, brothers make cases for Thorne and Denys Mallister — but Sam (!) shuts them both down by running through a highlight reel of Jon’s awesomeness. Killed a giant. BOOM. Saved The Wall. BOOM. Led the mission to avenge Lord Commander Mormont’s death. BOOM. (It should be noted that speechifying is Sam’s strength: He comes across as sassy, strong and able to sway the crowd.)

Jon “may be young, but he’s the commander we turned to when the night was darkest,” Sam says, prompting a lot of applause from the assembled brothers. That’s why it’s no real surprise when the votes are counted and there’s a tie between Snow and Thorne. But wait! Maester Aemon casts the final ballot, and he throws his support behind Ned Stark’s bastard! Ladies and gentlemen, I give you Lord Commander Jon Snow.