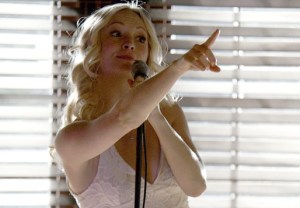 Stefan’s reign of terror might have ended on Thursday’s Vampire Diaries, but Caroline’s dehumanized shenanigans are far from over.

“Caroline will certainly leave a path of destruction in her wake; her danger knows no bounds,” executive producer Caroline Dries tells TVLine, which is particularly disturbing to hear after this week’s series of unfortunate events. (Is there anything more heinous than putting Matt Donovan in mortal danger? … I didn’t think so.)

The former Miss Mystic Falls will be back to her old self by the end of the month, though it’s unclear how her lapse in judgment will affect her future with Stefan. Per The CW, the May 7 episode finds Caroline coming to “a realization about her and Stefan’s prospects of being together.”

“When all is said and done, the queen of stress cleaning will have some work to do,” Dries adds. “Once she comes down from this violent streak, her humanity will return and we’ll recognize her again.”

This is especially good news as we look towards Season 7; with Nina Dobrev’s exit now just four episodes away, Caroline is essentially becoming the show’s main female protagonist. (We love you, Bonnie, but it’s not called The Witch Diaries.)

TVD fans, what are your hopes for Stefan and Caroline moving forward? Drop ’em in the comments section below.