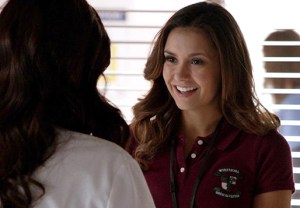 It started with Elena’s faux-happiness over Jo’s pregnancy, which Alaric’s baby mama immediately saw through. Then came Elena’s moment of blatant self-loathing: “There’s always going to be a part of me that’s capable of doing what [Stefan and Caroline are] doing.”

You know what else didn’t help? Matt rejecting Elena’s blood at the hospital — more on that later — and venting his own personal frustrations about the troublesome vampires in his life.

This girl is over being a vampire in every conceivable way, and I can’t say I blame her. That little speech she gave to Damon about letting herself be sad for a minute broke my damn heart. (Take the cure, girl! Take it and run!) 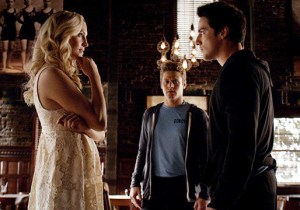 KILLER KARAOKE | Meanwhile. Caroline and Stefan’s tour de madness continued with a twisted game of “Caroline Trivia,” in which Matt and Tyler answered questions about their mutual ex, competing for the grand prize of… staying alive. (It was basically that episode of Friends with the contest, only Monica never threatened to eat Joey or Chandler.) Matt attempted to quell Tyler’s wolf-y rage, but as always, his best intentions put him in harm’s way — and the hospital. Womp, womp.

FAMILY THERAPY | Fortunately, Lily — with a little coaching from Damon — was able to flip Stefan’s humanity switch. All it took was a gut-wrenching trip down memory lane, in which she apologized for not sticking around to protect Stefan from his father’s judgment. As a thank-you for helping out, Damon handed the Ascendent over to Lily, unaware that the “friends” she plans to bring back from 1903 are actually half-witch/half-vampire “Heretics,” described as being like Kai… with more bloodlust. And there are six of them. 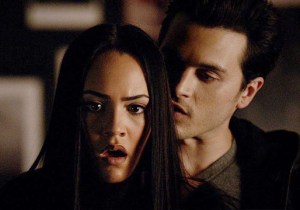 ROCK THE BOAT | We entered this week’s episode wondering about Enzo’s mysterious “connection” to Lily Salvatore, and within minutes, we had our answer: She’s the one who turned him into a vampire! Via flashbacks to 1903, we learned that Enzo was dying of consumption aboard a boat to America, when Lily rescued him by turning him into a member of the undead community — if you can call that rescuing. As Enzo put it, “She made me a monster, then abandoned me.”

TVD fans, your thoughts on this week’s developments? Elena’s future? The arrival of these so-called “Heretics”? Drop ’em all in the comments section below.