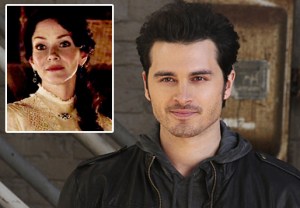 After six long, complicated seasons, it’s fair to assume that everyone on The Vampire Diaries is connected in some way — but Enzo and Lily? Now that‘s a story fans need to hear.

Fortunately, that’s exactly what Thursday’s episode (The CW, 8/7c) is all about.

“We finally get to discover the truth about how Enzo was turned into a vampire, which is exciting,” Michael Malarkey tells TVLine. “We have a little flashback episode which delves into all of that, and his connection to Lily Salvatore.”

And you can bet that whatever Enzo and Lily’s connection is — some fans are already speculating that he’s a secret Salvatore brother, though I think that might be a little premature — it’s going to have a major impact on Enzo’s relationships with Stefan and Damon.

“There’s going to be this element of being torn by his friendship with Damon — who’s a bit of a loose cannon by the end of the season — as well as his friction with Stefan,” Malarkey explains. “It ends with a prospect of this connection that Enzo has with Lily and what they’re going to end up doing together.”

Enzo’s flashbacks are triggered by a conversation with Sarah, as she “turns the tables on him” and forces him to confront his past. But don’t start ‘shipping Enzo with the Salvatores’ great nice just because she’s getting him to finally open up.

“Poor guy’s got quite a bit of baggage,” he admits. “Getting into a relationship with someone might be a little forced at this stage in the game, but if there was even an inkling of that for him, it might be a grounding force. He could probably use a good woman to keep him from his wily ways.”

As for his soon-to-be-former co-star Nina Dobrev — I don’t know if you’ve heard, but she’s leaving the show — Malarkey says he’s “really going to miss her,” especially the “great energy that she brings to the table.”

So, TVD fans, it’s time to start guessing: How is Enzo connected to Lily? Were they *ahem* involved? Did she turn him into a vampire? This is The Vampire Diaries, which means the possibilities are literally endless, so drop a comment with your best theory below.