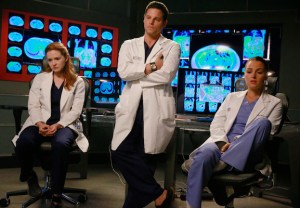 Where in the world is Derek Shepherd? The question loomed large over this week’s episode of Grey’s Anatomy, especially after a small plane’s crash flashed Meredith right back to… well, you know. So where was her husband? Read on…

BAD TRIP | As “One Flight Down” opened, Richard was jamming in his car to “In the Bush” when he saw a plane go down. Hauling ass to Grey Sloan, he arrived just before the victims. Understandably, Mer and Arizona couldn’t help but remember the ill-fated flight that resulted in Mark and Lexie’s deaths and Robbins’ amputation. “We are okay,” they assured themselves while freaking out in a supply closet. Knowing how difficult the day would be for Mer and Arizona, Alex told Callie that they should keep an eye on their fellow docs. “There oughta be some rule,” he said, “that people who’ve been in a plane crash can’t work on one.” At the same time, Mer was extra worried since, not only had she and Derek survived a crash before, but he was a no-show at his meeting in D.C. (Flashbacks to their recent reunion only heightened our sense of her feared loss.) In fact, while performing surgery on the pilot, Mer became so distracted that Bailey asked if she had to excuse herself, then gave her till 5 p.m. — then and only then could she panic. Shortly thereafter, Maggie — who’d only just learned from her colleagues about the previous crash — was called in to assist Mer and Bailey.

HEART FAILURE | Meanwhile, Amelia was so adamant about not even discussing her relationship with Owen that he finally threw in the towel. “I’m done,” he said, concluding that he hadn’t provided enough of a high for her. Afterward, Stephanie put her foot in her mouth by telling Hunt how romantic she thought it was that the pilot and a passenger had been on their first date when the plane went down and had already realized they were in love. Later, she wondered if Owen and Amelia’s sniping had caused them to make a mistake that caused the woman to forget the plane crash, the pilot and the fact that she was head over heels in love. When Owen caught Amelia yelling at Stephanie for pushing the amnesiac too hard to remember her date — and took the opportunity to yell at Amelia — Edwards told them that she was the protagonist of this story, dammit, and “you two are mussin’ it up!” (Love it when Stephanie’s feisty.) Finding Edwards wheeling the patient into the pilot’s room, Amelia barked at her again… but the ploy worked: The woman remembered! Inspired, Amelia decided that she was ready to talk to Owen. But, haunted by his own memories of putting Cristina and Co. on the earlier plane that went down, he was hardly in the mood. “I won’t survive another plane crash,” he said, “and that’s all we are.

COMING UNGLUED | Miraculously, Maggie saved the pilot with… glue. Afterward, she suggested that, stressed out as Mer was, she go home. (At that point, we cut to another flashback, this one of Derek saying that they should add another baby to their family… starting that second!) Come 5 p.m., Mer picked up the phone… just as a police car pulled up in front of the house. Apparently — based on next week’s scenes — Derek was in a car accident. But did he live?!

PAST TENSE | While helping Arizona treat expectant moms whose yoga class had been crashed — or crashed into, to be specific — by a driver who’d witnessed the plane’s downward spiral, Alex made her nuts with his concerned “hovering and lurking and creeping.” When she apologized for snapping at him, he revealed that he had been the one who’d performed her amputation. Off this, Callie explained that she hadn’t told Arizona that it had been Alex who made the cut because 1) it had been her call, and 2) she hadn’t wanted Robbins to hate both of them. “Thank you,” Arizona responded.

I, WITNESS | In a funny B plot, April called Richard on his BS as his tale of witnessing the plane crash got taller and taller. But he managed to save face by explaining that — even if he’d embellished a bit — the experience had made him reflect on how much he had to lose. So in a way, it WAS a near-death experience.

OK, your turn. What did you think of the episode?