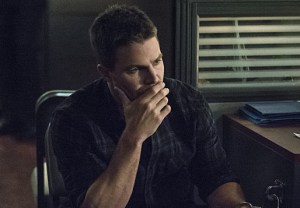 This week’s episode of The CW’s Arrow managed to take what was a wobbly “twist” — Roy aka Arsenal declared himself to be the Arrow, and turned himself in! — and find in the aftermath some meaty material that both resolved the cliffhanger, exited a major character and lit a fire under the Ra’s storyline.

After Roy was taken into custody, Laurel swung into lawyer mode and got Ollie sprung, seeing as her dad had a confessor in cuffs and zero evidence against Oliver. But Oliver found no peace in that swap, and endeavored to get Roy out of jail, before the Arrow’s many interpreted enemies did him in.

Oliver, alas, faced a battle on two fronts, seeing as his limitations in “saving the city” as the Arrow inhibited his want to take on a metahuman, eventually dubbed Deathbolt, who was wreaking havoc. Felicity suggested that Ray could step in and fill the void — and as Palmer himself noted, a man of science is perhaps better able to best this wielder of weaponized plasma.

Or not. Because the Atom then got his tin ass kicked — as an anxious Felicity ran the comms. So yeah, that plan merited a revisiting.

Oliver meanwhile continued to run hot, determined to bust Roy out of jail and, well, just do more. An intense Diggle warned his colleague to “throttle it back” before he loses everything, but to no avail. Felicity then chased down Oliver and suggested there was more going on with him that just the Roy sitch, that he was struggling with the reality that, more than ever — and perhaps forever — the Arrow is no more, given the Ra’s of it all. He needs to delegate, even if it means leaving Felicity to plant some device at the city power grid herself, only to get captured by the “security guard” whose mug shot she just looked at a few scenes ago…?

For Round 2, and with Felicity now in Deathbolt’s cross hairs, Ray uses a new gizmo he built into the Atom suit that allows Oliver to “fight” for him, Real Steel-style. And though Ray nearly loses, again, a Mickey Goldmill-esque pep talk from Oliver helps him get off the ropes and deliver a KO.

Meanwhile in prison, after Roy had already fantastically rebuffed a group assault, a guard later stabbed him, leaving him for dead. Shortly thereafter, Lance delivers to Thea and Oliver the news, that Harper is now playing a harp. (I’m here all week, kids!) Oliver is barely able to reel from the bombshell when Diggle and Felicity reveal to him a very much alive Roy, his death faked with some help from a friend of Lyla’s (the guard) and somethingoranother that slowed his heart rate. Being “dead” and all, Roy bids the team adieu, asks them to say bye to Thea for him, and leaves town to “start a new life.”

A dead/undead boyfriend, however, is perhaps the least of Thea’s problems, seeing as Ra’s has darkened her patio doorstep. She makes a futile attempt to roundhouse kick the League leader into oblivion, but Ra’s commanded the upper hand, and ran through her with his blade, suggesting that “sufficient motivation” should get Oliver to succeed him, as “asked.”

Elsewhere:
* In once-again-meandering flashbacks, Oliver and Maseo learned of General Shrieve’s intent to use the Alpha/Omega in Hong Kong. After (wayyyyy easily) infiltrating Shrieve’s base, Oliver found the plan, and he, Maseo and Tatsu plotted to thwart it.
* Hearing Felicity basically tell Oliver that she loved him visibly broke Ray’s heart.
* Upon locking up Deathbolt in the S.T.A.R. Labs Pipeline, Ray’s inquiry into how the metahumans get fed and poop is interrupted by Cisco’s realization that their latest capture wasn’t in Central City at the time of the dark matter explosion — so how did he become empowered??

What did you think of “Broken Arrow”?