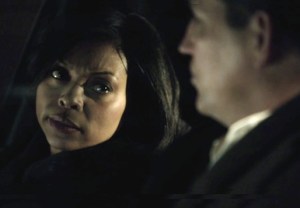 It was never a matter of if Taraji P. Henson would resurface on CBS’ Person of Interest, but when. And how. And why.

After all, Detective Joss Carter was tragically killed in the November 2013 episode “The Crossing,” gunned down by an HR goon at the close of a highly arduous, seemingly victorious crucible. She died in the arms of John Reese, with whom she shared an intimate bond — or, as intimate as things ever get between any of the stone-cold good guys on the high-stakes drama.

Given that connection, it makes sense that Carter reappears (tonight at 10/9c) when John delves into an old cold case of hers, prompting Team Machine’s kneecap-terminator to revisit a stakeout they once shared. All told, the episode underscores what and who Joss and John were to each other as the show takes its closest look ever at the latter’s demons, all capped by a chilling twist.

TVLine spoke with POI showrunner Jonah Nolan about bringing back Henson, now the star of the hit Empire, and her role in this pre-finale “quiet before the storm.”

TVLINE | Which came first: your want to somehow bring back Carter, or this deep dive into John’s psyche that she ultimately figured into?
Kind of both. When Carter was killed off and Taraji left the show, we always said, “Everyone lives forever in flashback on this show.” So we had been looking for the right episode to bring that character back, to get a chance to have Taraji back on the show. And through this season, Reese’s emotional isolation has become more and more a focus. These guys [on Team Machine] have been stuck in these cover identities for a season now, and whether they wanted them or not, they’re kind of “normal people” — and trying to pretend to be normal just highlights all the more how shut off Reese is from the rest of the world. The character who really could cut through the bull–t and talk to Reese on that level, and the person who related to him the most in terms of their [military] background, was Carter.

TVLINE | Yes, it struck me during this episode that John doesn’t really have a “talk-to” on the team for this kind of conversation.
His relationship with Wrenn [Schmidt]’s character [Dr. Iris Campbell] kind of highlights the fact that you have all these damaged people, between Finch and Root and Fusco, who are great relationships but are not necessarily people 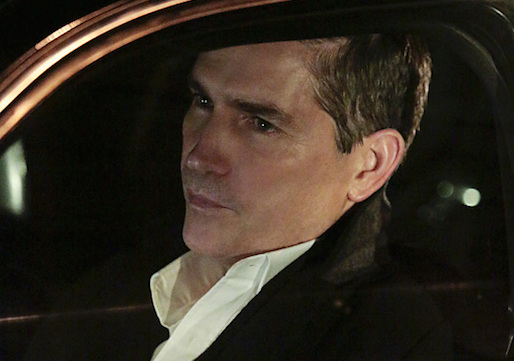 who can speak to Reese’s heart on that level. So it felt like a very organic thing, and the right thing, for the episode to play out this way.

TVLINE | Why did you decide to stop at this point in the season to do this character work on John?
Part of it was a timing issue. We had reached out to Taraji last November or so and said, “We’ve got this killer idea; what do you think?” Empire had not come out yet at this point, and she had a window [in February] before she went off to do a movie, so part of that drove it. But also, the last two episodes of our seasons often are big, serialized story movement, so this felt like a great moment to build to a climax with Reese’s emotional development — a bit of a “quiet before the storm,” if you will.

TVLINE | It feels organic especially since he just took that big step with Iris [by kissing her]. It’s like something in John wants to evolve. He’s ready for some next step as a human being.
To my earlier point, he had to pretend to be a normal person this season, and that’s starting to slowly sink in a bit, which is great fun. He’s never going to be the warm, affable “guy next door” — this is a guy with demons — but this was a great opportunity for us with the Carter character. She was someone who from the first scene of the pilots onwards, after shooting him down, looked right into his eyes and saw everything.

TVLINE | Would you say this is the most “naked” we’ve seen John?
Oh, I think so. We’ve had some great moments with him over the years, but we intended, as you said, a deep dive into what makes this guy tick. To dig up his deepest, darkest secrets in terms of why he’s made the decisions in his life that he has, and see what that means going forward.

TVLINE | Obviously Taraji is a professional and a terrific actress, but did she have to catch herself at all, like, “Oops, I did that scene 5 percent too Cookie”?
[Laughs] I don’t think so. We did 50-plus episodes with Detective Carter, so I think it was like slipping on a comfortable old coat for her. I’ve been watching Empire religiously every week, as has everybody else, and as much as I love Cookie, it was great fun to see Taraji back as Carter — obviously very different characters!