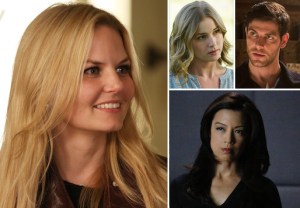 Will a Once Upon a Time “favorite” put in another appearance? Who steps up when Blacklist‘s Red goes down? Are things looking “grave” for Revenge? Are you ready for the Grimm [spoiler]? Read on for answers to those questions plus teases from other shows.

Are Once Upon a Time‘s Emma and Killian/Hook listed anywhere on TVLine’s May Sweeps Scorecard? –Bridget
Bound as I am by the strict rules of May Sweeps Scorecard Intel Gathering, I can only tell you this: Once has an entry in four, possibly five, of the categories.

We’ve not had many spoilers for Once Upon a Time‘s Rumbelle recently. Is there anything that Adam and Eddy are willing to spill? Will we see them in the Dark Castle again? Will we see the chipped cup again? –Betsy
As I do, I hand-delivered your question to the Once creators, and Adam Horowitz confirmed that while there will be no revisiting of the Dark Castle during this last stretch of episodes, “The chipped cup does come back.”

Do you have any scoop on the final episodes of The Blacklist this season? –shellerm
When the series returns April 23, you won’t have to wait long to find out Red’s post-gunshot fate — and his survival will be more touch-and-go than you’d expect. “We pick up immediately, in the moments of the shooting. Dembe was being shot at, and Red’s bleeding on the ground, clearly wounded in a horrible way,” creator Jon Bokenkamp tells us. “[Red’s condition] creates a void, and Liz is going to have to step up and fill the space that is occupied by Red and work through this situation.”

I was wondering if I could get any insight on Revenge as we approach the season (or possibly series) finale. (The season finale has been named “Two Graves”!) –Sabrina
It certainly sounds ominous, doesn’t it? “We’ve only ever done one-word episode titles since the show began,” showrunner Sunil Nayar reminds, “and the show began with this quote Mike [Kelley] had chosen from Confucius: ‘Before embarking on a journey of revenge, dig two graves.’ We wanted … to tell people that there is an element to this journey that will be over [in the finale]. You just have no idea for whom those graves are dug, or who will end up in them.”

Is there a possibility of Cobie Smulders reprising her role as Maria Hill on Agents of S.H.I.E.L.D. this season? –T
I don’t know about Cobie appearing in the flesh, but you will see “Maria Hill” in this Tuesday’s episode, which as you know finally reveals the dark origin of “The Cavalry” aka May’s infamous nickname. (Suffice to say, the backstory kicks a lot of ass, literally and emotionally. Kleenex will be needed.) Elsewhere in the episode, Skye — with help from Jiaying — gets a better handle on what exactly her gift is (or isn’t).

Any scoop on the four remaining episodes in this season of Brooklyn Nine-Nine? –Lauren
In the first episode back, airing April 26, Jake winds up in the hospital. Now, why do I get the feeling he won’t be an ideal patient?

What’s the plan for 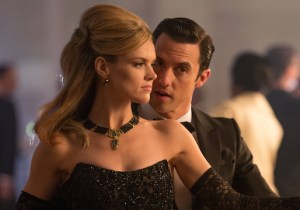 Gotham‘s Barbara? Will she and Jim come face-to-face again before the end of the season? Or perhaps she confronts Leslie? –Nicole
Barbara actually figures into the Ogre storyline that kicks off Monday, and since Gordon will be on the hunt for the killer (played by Milo Ventimiglia), it’s safe to say the estranged lovers will be reunited, though perhaps under less-than-ideal circumstances. As for Barbara/Leslie, “Yes, they are going to meet in Episode 22 — and it’s a corker!” show boss Bruno Heller effuses. “Those two have several agendas they need to work their way through.”

I’m so worried about the upcoming death of a main character in the Grimm season finale! What can you tell us about the events leading up to the big moment? – Sam
Right before the offing, there’ll be “a lot of vengeance coming to a head,” series co-creator James Kouf tells TVLine. Co-creator David Greenwalt adds that the scene will be filled with “revenge and wild surprise.”

In the May 27 episode of Grimm, Viktor was rushed away in a way that was obvious it wasn’t Alexis Denisof in the scene. Will he appear again anytime soon or is he now too busy with Finding Carter? – Jordan
You answered your own Q, Jordan – Denisof’s Finding Carter schedule is keeping him plenty busy, so Viktor won’t be seen again anytime soon. Ergo the recent introduction of Nico Evers-Swinddell as Kenneth, an even more ruthless member of the royal family.

What happened to WGN America’s Ten Commandments series? It’s been a year since we had any news about it. –James
I checked on the project for you and was assured it’s still in the pipeline, in pre-production. (This is where I evoke the little-known 11th commandment, “Thou shalt not get impatient!”)

In the last four episodes of NCIS, will there be some recurring characters or guest stars? –Ann
I can tell you that in the season’s antepenultimate episode (airing April 28), Matt Jones reprises his role as NCIS Special Agent Ned Dorneget (and for multiple episodes) and Jamie Bamber returns as Bishop’s husband. (If you also watch NCIS: New Orleans, know that Steven Weber will be back as Councilman Hamilton in the final two episodes, while Stacy Keach returns as Pride’s pop in the May 12 season finale.)

Do you know what the name of the song was at the end of this week’s NCIS: New Orleans? –prusso
That was “Keep Going,” by Rachael Yamagata. 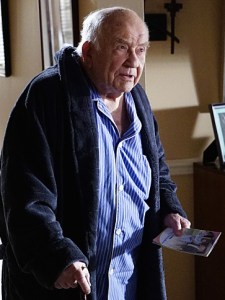 Criminal Minds scoop. I’ll take anything you’re willing to throw my way. –Michelle
I know, it feels like Ed Asner is everywhere these days, but his role on Criminal Minds this Wednesday is a far cry from his recent Good Wife visit. “He plays Hotch’s father-in-law, Roy, who’s been diagnosed with early Alzheimer’s, and he doesn’t like Hotch at all. In fact, I think he’s the only person in the history of Criminal Minds who’s told Hotch to shut up,” says showrunner Erica Messer. “Bruce Zimmerman wrote it and Laura Belsey directed, and it’s so real in that way of ‘family drama to turned up to 11,’ because Roy blames Hotch for Haley being dead – ‘I trusted you to keep her safe and she died under your care.’ It’s just… holy cow. But then on top of that there’s this emotional vulnerability of a strong man who’s going to have to depend on others to survive, and the last thing he wants to do is ask Hotch for any help.”

Does a show like Dancing With the Stars (that goes a minute over every week) have any effect on the ratings of the show that follows (here, Castle)? Do they adjust for that? Also, are people watching less TV in general, or are they just watching less traditional commercial broadcast television? –Jules
When a well-watched reality show such as DWTS, The Voice or Idol (in its heyday) “bleeds” over, yes, it can inflate Nielsen’s fast nationals for, say, Castle – but once that overrun is subtracted out, it’s reflected in the afternoon finals. As for TV consumption trends, yes, last year saw a 12.7 percent decline in traditional TV watching, fueled in part by the popularity of the Netflix and the Hulu and the Amazon.

Real questions, real answers. If you need the Inside Line on a favorite show, email InsideLine@tvline.com!  (With reporting by Vlada Gelman, Kim Roots, Andy Swift and Rebecca Iannucci)