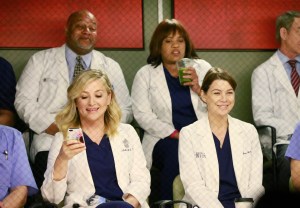 Watching this week’s Grey’s Anatomy, you might have thought that Owen had a pretty serious relationship problem on his hands. After all, Amelia went so far as to call their romance a mistake. (Ouch.) But, compared to the patient that Stephanie treated with Catherine, Hunt got off easy in “Crazy Love.” Read on, and I’ll tell you all about it.

DANGEROUS CURVES | Upon learning about Owen and Amelia’s involvement just as Derek was headed back to D.C. to resign, Meredith warned her sister-in-law to be careful with Cristina’s ex. Afterward, Amelia clashed with Callie over a course of treatment for a teenage golf champ with a curved spine. Overhearing their debate, Owen sided with his girlfriend despite the fact that her approach was riskier than Callie’s. When the surgery went south, Amelia had to have Ben call in Callie, lest the patient end up paralyzed. But even with Torres pitching in, the youngster still lost what was most important to her – her future as a golfer. After breaking the news to the kid’s furious mom, Amelia lit into Owen for butting in and backing her just because they were lovers. “This is why it is not smart to mix personal and professional,” she railed — it changes their minds in ways that compromise their judgment. That being the case, their relationship was, in her eyes, a mistake. That evening, she snapped at Meredith, noting that her sister-in-law didn’t know what she’d been through. “I need you to cut me some slack,” she said, “and back the hell off.” The following day, Callie (who’d revealed that she’d been too bored by Dan to go out with him again) counseled the patient that someday she’d find something new to love instead of golf — the implication being that she herself would also find something new to love instead of Arizona. At the hour’s end, Owen reached out to Amelia, and she brushed him off. And the White House called Mer wondering what we are now left to ponder: Since Derek didn’t show up for his meeting, where was he?

FLEE, WILLY! | After an unfaithful chef stumbled into the ER with his mistress/sous chef and his johnson in a Chinese food carton, Grey Sloan came alive in a way that this office only does when the ice cream man is parked in front of the building. Though Richard protested, April called in Catherine, who encouraged Stephanie to consider a future in urology. After the philanderer’s penis was reaffixed, Webber barked at Kepner for recruiting his ex against his wishes, but she not only stood right up for herself, she added that, for what it was worth, she’d thought they were good together. Just when things seemed to be settling down — the chef and his wife even made up! — his pecker was cut off yet again, this time by his jealous mistress! Impressed anew when Stephanie convinced “the other woman” not to flush the appendage, Catherine offered her a fellowship — which, now having held a severed wiener, was of no interest to Edwards. Finally, as the hour drew to a close, Richard apologized to Catherine for hurting her — and promised to do it again, the same as she would him. “I’ll accept the risk,” he said, “because you are worth it.” And yay! They were reunited. (I can’t be the only one who loves them, right?)

CHATTY CATHY | Meanwhile, Ethan mystified Maggie by ignoring her after their kissless date, leading her to fear that she was a hideous troll whose “only orgasms [were] gonna be self-made” in the future.” When she called him on his behavior, he explained that she’d never stopped talking during their date – in fact, it had been more like a monologue than a date. Later, Alex – incredibly sweetly – supported her, even singing the praises of her slight lisp. “It makes everything you say sound good,” he swore. Off that, Maggie apologized to Ethan for having “brought the thunder” on their date because she’d been so nervous. In response, he asked her out again.

OK, your turn. What did you think of the episode? Do you think Derek is with Renee, or does the show just want us to suspect that? Hit the comments!