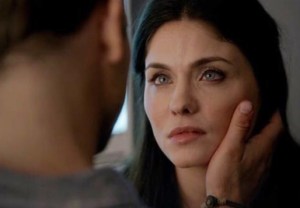 It’s rare for a TV drama to go six seasons with neither a wedding nor a major pregnancy, yet The Vampire Diaries (returning April 16 at 8/7c on The CW) has managed to go against the grain — until now.

Jodi Lyn O’Keefe tells TVLine she’s “honored” to help knock both of those off the series’ to-do list, following Alaric’s surprise proposal to a pregnant Jo. “Then again, I feel honored just to have lasted this long,” she admits. “So let’s start with that.”

Below, O’Keefe reveals what she can about Jo and Alaric’s impending nuptials — I’m thinking the season’s penultimate episode, reportedly titled “I’ll Wed You in the Golden,” sounds like a reasonable wedding date — and reflects on how that major life event might inspire a change in an already-uncertain Elena.

TVLINE | Guest stars on this show, especially those that date Alaric, tend to have a short shelf life. How did you feel when the producers told you what they had in store for Jo?
Every time I get a new script, I still skim it for my parts just to make sure I’m still alive. [Laughs] I keep waiting for that moment. So it did make me a little more hopeful when they told me what they had planned for her.

TVLINE | Ian Somerhalder recently told us he doubted Jo would let Alaric make Damon his best man. Do you agree?
You know what? I think Jo, at this point, would be OK with anything. She’s been through hell and back this year, so Alaric can have any best man he wants.

TVLINE | So Jo is cool with Damon now? I know they’ve had their ups and downs — mostly downs.
I think she is, yes. She’s still a little wary around everyone, which I think is smart, but I think they’ve finally gotten their s—t together. [Laughs] 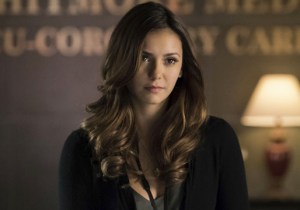 TVLINE | I imagine Jo has to make Elena her maid of honor, right?
Don’t you think? I mean, I was thinking about that, myself, because I haven’t gotten the wedding script yet.

TVLINE | Speaking of Elena, she finds out Jo is pregnant soon, and it causes her to reflect on her own future. What can you say about that?
I think Jo is going to be how she’s always been with Elena, which is very supportive. She’ll want her to think it through and decide what’s important to her, and make sure she makes any decisions based on that. Jo has been, and will always be, a voice of reason for Elena, and whatever choices she makes, Jo will support them. I think Jo really does adore Elena, and she just wants to be a support system for her.

TVLINE | Do you think Elena should take the cure now that it’s back in play?
That’s an excellent question, one I haven’t even thought about. I wonder what’s going to be more important to her; I wonder if her life as it is now is what she ultimately wants, or if she wants the kind of life she previously had with those other options. It’s tricky.

TVLINE | Back to Jo and Alaric, how do you think they’ll be as parents?
I think they’re going to be fantastic, very doting. It’s going to be such a new experience for both of them, one Alaric never thought he’d have, and one Jo just never factored in. It came as a big surprise to her, but also a welcome one, so it’ll be interesting. How do you have a baby when you’re surrounded by vampires?

TVLINE | This might be a silly question, but should we expect to see Kai at the wedding?
Jo is still really fearful of her brother, and rightly so. I mean, he slaughtered her entire family when they were kids, and I’m not sure how much we can trust his change, even with Luke’s influence over him.

TVD fans, what are your hopes for Jo and Alaric’s nuptials? And which vampire should take the cure this time? Drop a comment with your thoughts below.