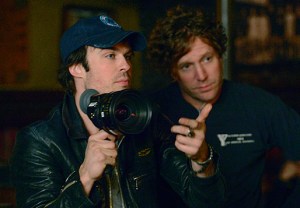 Despite the Salvatore brothers rarely (if ever) seeing eye-to-eye, The Vampire Diaries remains rooted in family, which is the exact philosophy Ian Somerhalder employed for his directorial debut, airing Thursday at 8/7c on The CW.

“When you talk about performance on set, you’re actually talking about the performance of an entire crew, as well as the actors,” Somerhalder tells TVLine. “You’re talking about 70 men and women who, when they’re at their best, allow the actors to perform their best. It’s then the actors’ job to show up prepared and ready to explore [the material].”

Somerhalder says he’s learned a lot over the years by closely observing his superiors, including executive producers Julie Plec and Kevin Williamson, and producer/director Pascal Verschooris.

“Production managers and the crew are really the unsung heroes of our performances,” he says. “They’re the ones that design the sets, work with the writers to get these amazing spaces, and deal with every director and actor who comes through. When they speak, you listen, and I’ve learned a lot from listening.”

Below, the first-time director discusses what the return of Lily Salvatore means for Damon, how he feels about Alaric’s impending nuptials and whether or not Damon might be inspired to get down on one knee anytime soon — or ever. 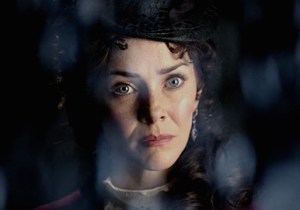 TVLINE | Damon just found out his mom is alive in a prison world. What’s going on in his head?
After finding out his mother is alive and didn’t want him? Think about this: Basically, the two most important women in his life — his mother and Katherine, the love of his life, or so he thought — both abandoned him. So he’s thinking, “There’s no way this happened to me twice. And not only did they abandon me, but they did it with a smile.” That, I think, is a really huge thing for him.  A huge, huge, huge crush.

TVLINE | On a more positive note, Damon’s pal Alaric is engaged. What are the odds he’ll ask Damon to be his best man?
[Laughs] Highly unlikely. They’re buds, so I don’t think Alaric would be the problem; it would be the beautiful woman Alaric is marrying who might have a problem with this crazy bastard. If I had a friend like Damon, I’m not so sure my wife-to-be would think it’s a good idea to make him my best man. But I’ll tell you, I’m really excited [for that wedding].

TVLINE | Weddings tend to get people thinking about marriage. Might Damon be inspired to take that next step with Elena?
[No hesitation] Nope. Think about it this way: Damon’s 173 and Elena’s 18 or 19. I mean, come on. Something tells me that’s not the best idea. 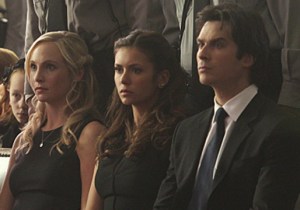 TVLINE | And then there’s Caroline. Will Damon help pull her out of her downward spiral?
I think he’s going to have to step up and do a bunch of stuff to make s—t work, but the thing is, Damon doesn’t care about very much other than Elena and Stefan. That’s really it. So I have to be very careful about making sure Damon’s not too concerned with a lot of other people. Sometimes, people want to make Damon really sweet and thoughtful — but no, that’s not him. Here are his priorities: “Is there bourbon? Is there gas in my car? Are Elena and my brother safe?”

TVD fans, what are your hopes for Damon and Elena in Season 6? Do you think a wedding is really that crazy? Drop a comment with your thoughts below.