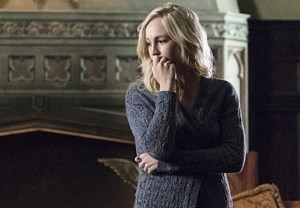 “I’ll be OK, mom,” Caroline told Sheriff Forbes before her gut-wrenching funeral on Thursday’s Vampire Diaries. “Everything will be fine after today.” Unfortunately, she had no idea how wrong she was.

Just as Candice Accola previewed, Stefan and Caroline indeed discussed last week’s #SterolineKiss, though probably not at the length most fans would have wanted; as she noted, “There’s no time like the horribly inappropriate present to get to the bottom of that.” Not ready to discuss the issue, Stefan told Caroline they should wait to talk after the funeral — triggering an unfortunate series of events he never could have predicted.

A brother-to-brother chat with Damon helped Stefan realize how he really feels about her (“I think this could turn into something even better”), but it was too little too late. By the time he mustered up the courage to tell Caroline how he feels, she had already snapped Elena’s neck, turned off her humanity and fled the scene. Man, that girl moves fast. 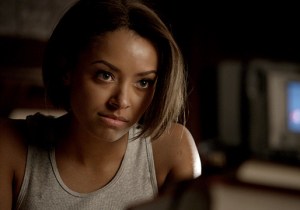 WHOA, MAMA! | It’s official: Bonnie Bennett has the absolute worst luck in the entire universe. The wayward witch thought she’d finally figured out how to escape from Kai’s ’90s prison, which she did… only to reappear in 1903, or as she described it, a “snowy hell dimension.” But because there’s no such thing as a coincidence on this show, Bonnie encountered a strangely familiar face in this new prison world: Stefan and Damon’s mother, Lily! She eventually made it back to the present, where she was greeted with a #BamonHug of epic proportions, but the question remains: What’s next for Lily Salvatore? (Maybe Damon didn’t need to deliver that eulogy, after all!) 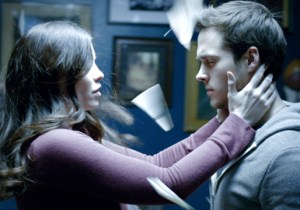 BABY ON BOARD | Watching television for the past 26 years has clearly taught me well, because the second I saw Jo puking at the top of tonight’s episode, I immediately imagined the beautiful offspring potentially cooking in her magical oven. My hopes were (temporarily) dashed when a slightly bearded Kai showed up, also puking, to explain that they were only sick because he merged with the wrong twin — but when her symptoms remained after surrendering her magic, my suspicions were confirmed. Not only is Jo pregnant, but following a  proposal from Alaric, it looks like she’s also heading down the aisle! 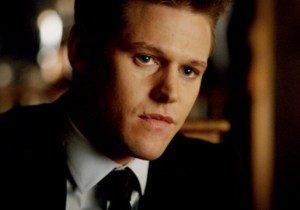 BOYS IN BLUE | This was also an eye-opening episode for Mystic Falls’ token humans; while Tyler showed up drunk to Sheriff Forbes’ funeral (no surprise there, to be honest), the emotional event sparked a fire in Matt. He decided he wants to join the Mystic Falls Police Department (again, no surprise there), and he even snagged an application for Tyler. Something tells me Tyler isn’t destined to don a uniform, but Matt? I mean, they don’t call him Matty Blue for nothing.

Vampire Diaries fans, what shocked you more: the return of Mama Salvatore, or Jo’s surprise pregnancy? And how do you hope Caroline’s little humanity problem plays out? Drop a comment with your thoughts and theories below.