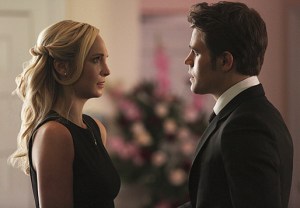 Thursday’s Vampire Diaries (The CW, 8/7c) is bound to be a tearjerker — Sheriff Forbes is, at last, laid to rest — but Candice Accola tells TVLine there’s a silver lining in the hour for Caroline, and it goes by the name of Stefan Salvatore.

“Caroline and Stefan definitely need to have a talk about what happened,” Accola acknowledges. “We will see them discuss it, and the result of that conversation will really paint a picture of what’s in store for them in the future.”

Read on for more of Accola’s thoughts on Caroline’s relationship with Stefan, the loss of her mother and the next step in her journey towards becoming “the best person that she can be.”

TVLINE | When we left Caroline last week, she was, understandably, a mess. What’s her mental and emotional state at the top of Thursday’s episode?
First of all, I don’t think there’s ever been a more depressing ending to a show ever. [Laughs] We’re going to see Caroline waking up to the reality that her mom is dead. We’ll see the exact same Caroline we’ve seen for six seasons; she’s got a goal to accomplish, which is to bury her mother, and she’s going to do it in an efficient fashion. She’s making lists and assigning tasks. We’ll see the business of death, all the things you have to do and the realities you have to face.

TVLINE | It’s been a rough season for Caroline as a character; how has that been for you as an actress?
It’s been a long couple of months with these emotional episodes. The running joke has been me saying, “Julie, can you please let me stop crying? I’m tired of crying!” But the episodes have also been so powerful, so I feel very grateful that the role of Caroline and this journey she’s on have been entrusted to me. So it’s exhausting, but I’m also grateful to go to work every day and play it out.

TVLINE | Are you bummed that you won’t be working alongside Marguerite McIntyre anymore?
The reality is that I probably saw her more outside of work than I did at work sometimes, so it actually works out fine for me. Whenever she writes an episode of The Originals, she comes down to Atlanta for the filming, so there are plenty of nights we’ll see each other. I am sad about not getting to work with her, though, because it’s always such a privilege to act in a scene with her. She brings such grace to the set, and I hope to emulate that. We all went out after the big death scene and had what we call an “Irish wake” for Sheriff Forbes, our own heart-to-heart moment to honor her. 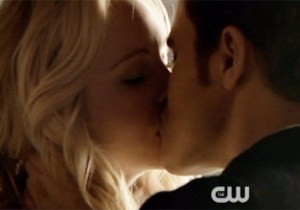 TVLINE | OK, let’s talk about Stefan and Caroline’s kiss, which I’ve been waiting for since Season 2. What was it like to finally film that moment?
I loved the progression of the Stefan-Caroline relationship. I love that it’s been such a slow burn, and I love that it wasn’t this aggressively dramatic moment; it was just really sweet and tender and the sun was setting. They didn’t need to start ripping each other’s clothes off. It was just a sweet, simple first kiss. And we could not have had a better sunset for that location shoot. The first day we were supposed to shoot it was cloudy and grey, so we swapped some scenes around and we filmed it the next day. We had to wait for the sun to set, then once it started setting, everybody was like, “Go! Go!” 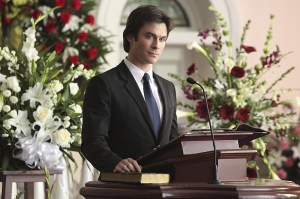 TVLINE | Caroline and Damon haven’t always gotten along, but it seems like they’re in similar situations with Sheriff Forbes. Will her death bring them closer together?
I love that Damon gives Sheriff Forbes’ eulogy. And you’re right, Caroline has been very back-and-forth about him; they haven’t gotten along for many seasons. But the fact that Caroline is focused on burying her mother, she doesn’t have time to think about her past experiences with Damon. I think her reaction to Damon giving the eulogy will surprise many of the viewers.

TVLINE | Julie Plec described this as the “Sheriff Forbes chapter” of the season. What does the next chapter have in store for Caroline?
We’re actually not that far ahead of the episodes that are airing right now, so the next chapter is building as we speak. For now, she’s just very focused on honoring her mother and figuring out what she needs to do for herself to move forward and to be the best person that she can be.

Vampire Diaries fans, do you approve of Stefan and Caroline’s budding romance? And what do you hope to see happen to Caroline in the next “chapter”? Drop a comment with your thoughts and theories below.