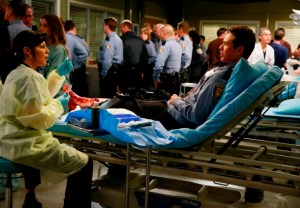 Did somebody order a testosterone infusion? This week’s Grey’s Anatomy not only featured Derek’s return to Grey Sloan but the introduction of True Blood’s Kevin Alejandro in the potentially recurring role of police captain Dan Pruitt and Hawaii Five-0’s young Steve McGarrett (Taylor John Smith) as a guest flirtation for Stephanie. But the hour was hardly all McDreamy charm and longing glances. Read on, and I’ll tell you the whole sad story.

THE COMEBACK KID | As “When I Grow Up” began, Mer was adorably telling Maggie that she was now one of those dreadful people who has it all. “I would beat myself up,” Grey admitted — if she wasn’t so tired from having sex with her husband. Meanwhile, Derek was learning from Owen that his reinstatement would have to be approved by the hospital’s neuro head — Amelia. Understandably, she had her doubts about whether her brother was really going to be able to work under her. “You don’t do second place,” she noted. But he was determined to prove her wrong — going so far as to clip the “boring aneurysm” that she assigned him. And, by the hour’s end, it did appear that it was all going to work out. Amelia even confided in Derek that she was falling for Owen — and afraid that it would destroy her. “It wouldn’t be love,” he pointed out, “if it didn’t.”

SINGING THE BLUES | After Richard welcomed a bunch of fifth-graders on a hospital field trip, the kids saw more than anyone expected — or wanted them to — when they just happened to be present when two cops shot during a robbery were wheeled in. To make matters worse, the cops were brothers! While they underwent treatment — with one passing away in the first 15 minutes and the other before the half-hour mark — Callie examined their captain, Dan, who had been shot in the leg. He needed surgery, she said, and would have to be off his feet for six to eight weeks. That was fine with him. After 14 years on the force, this robbery marked the first time that he’d had to fire his weapon, and now he was ready for a desk job.

LIVER DIE | No sooner was the teenage getaway driver from the robbery wheeled in than Bailey discovered that he needed a new liver and fast — and asked Mer to ask the mother of the dead cops to donate the organ from one of her sons. When Grey wouldn’t do so, Bailey did it herself. But, as you’d expect, the second the mother learned who the liver was for, she hit the roof and refused. Upon being updated, Dan explained to Callie and Mer that he wasn’t interested in the boy’s condition because he hoped the youngster would pay for what he’d done. On the contrary, he and the late cops — all of them — had tried to help the kid. That being the case, the deceaseds’ mother changed her mind and donated a liver the way her children would have wanted.

HEART BEATS | On a lighter note — and the hour had quite a few, thanks to Arizona and Alex entertaining the schoolkids — lovelorn Stephanie clicked with the fifth-graders’ cute chaperone… only to learn that he was 17 years old! And, as the episode neared the end, Dan admitted to Callie that “if today were any other day, I’d ask you if you’d like to have dinner with me.” She didn’t say yes, but it sure looked like she would when he returned for his follow-up appointment in 10 days. Finally, Jackson cleaned up the fallen cops before their mother saw them again — the way Mark would have, he noted to April. Aww…

OK, your turn. What did you think of the episode? Did you like Callie with Dan? Hit the comments!