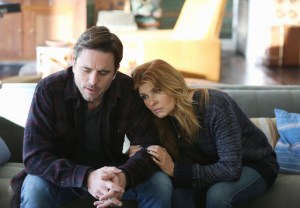 Fool me once, Nashville, shame on you.

Fool me twice — with the very development I’d been hoping for, a tangle of bare limbs, “babe” and bittersweet regret, wrapped in a wrinkled plaid blanket and laid before me like a very early, very naughty Christmas present — shame on me.

But I also remember when our Music City favorites had a very dramatic hook-up in Season 1… and a very dramatic break-up an episode or two later. Callie Khouri giveth — with a reunion seasons in the making — and Callie Khouri taketh away, and I suppose all the rest of us can do is make like Deacon and revel in the joy right there in front of us for as long as it lasts.

Meanwhile, Sadie killed a guy? Read on for what takes place in “I Can’t Keep Away From You.”

UNHAPPINESS IS A WARM GUN | Before you get to the long drink of sweet tea that is the Deacon-Rayna reunion, you’ve got to eat your greens. So, let’s briefly hit the week’s other storylines, starting with Sadie’s. The songwriter returns to Nashville after speaking out about her abusive ex on Good Morning America, then runs into Luke at the studio. She helps him flesh out the Rayna-done-broke-my-heart ballad, which leads to dinner at a diner, which leads to her putting her hand on top of his for a beat too long. Sigh. I had hoped that their conversation at the CMAs wasn’t a hint at what’s to come, but it looks like maybe it was. She shuts down whatever’s budding between them, though, and turns down his offer to walk her to her car in the parking garage.

Unfortunately, that’s a bad call, because her abuser, Pete, is waiting for her near her vehicle — and he’s mad about the GMA segment. She reaches into her purse and pulls out the gun we saw her buy a few weeks ago, they tussle, and he winds up bleeding out on the garage floor as Luke happens to pull up in his car. Sadie, repeat after me: “And then we both reached for the gun.”

Gunnar and Avery boost her up by helping her write an eff-you anthem to all the haters, which they perform as the opening number at the show that evening. Scarlett nails it. I hardly want Scarlett to become a jaded jerk, but maybe this can be the start of her not caring so much what every single person out there thinks of her?

At the end of the night, Gunnar is screwing up the courage to tell Scarlett he like-likes her again, but Dr. Hotstuff (aka Caleb) shows up — after one date? That’s bold — and offers to put her up in his hotel room for the night. And that’s where she winds up, to Gunny’s chagrin. 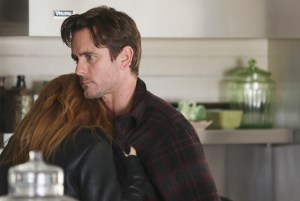 TEDDY IS DEAD-Y | Like Ol’ Leopard Panties when you purchase the all-inclusive package, Teddy is going down. His involvement in the hooker’s business (and her biznass) is likely to earn him a trip to jail, because she makes it clear she’ll sing his name loud and proud if/when she faces prison time. She shakes him down for disappearing money, which he doesn’t have but tries to get by doing some shady finance deal through his office. (Side note: Isn’t this type of thing the very way you got in trouble at the beginning of the series, Tedster?) When that looks bleak, he in turn threatens Jeff… who realizes that the only thing he really has to lose is whatever he has going with Layla — too bad she makes the decision to keep their relationship all-business.

WILL HE OR WON’T HE? | Non-breaking news: Will is still in the closet. New development: Songwriter Kevin, with whom he penned a lovely ditty, totally knows. And though Will leaves for a while, he winds up wanting to work with the new guy again.

NO ONE WILL EVER LOVE YOU LIKE I DO | Finally, it’s Deacon and Rayna time! We pick up exactly where we left off, with her apologizing for hitting him and him apologizing for pretty much everything he’s ever done to her and both of them crying like hopefuls at a telenovela audition. After the soggy sorrys are done, Ray clings to Deke while he explains that he’s just waiting for a new liver — and that he doesn’t want them to be together while he’s sick.

Annnnnd, they’re arguing! That was fast. He scoffs at her pity. “That’s not pity, that’s love. Don’t you get that?” she says. He hits low with his counter attack, saying that he’s going to make this decision because she’s made all the rest of the decisions (marrying Teddy, keeping Maddie’s paternity a secret, agreeing to Luke’s proposal) regarding their relationship.

They fight for a while, and it’s rough. Rayna, in particular, looks like someone kicked all the puppies. Choice moments: “I’m going to die, and I don’t want you around to watch it,” him breaking her heart by admitting he doesn’t believe in their ability to be together, Rayna destroying his guitar by smashing it on the ground (yes! really!), and through it all, Rayna absolutely refusing to leave.

She finally breaks through his ridiculous reasoning by pointing out that he can’t save her and Maddie from the pain related to his disease, so why shouldn’t they all be together and enjoy each other for as long as possible? Deacon does the only thing he can do, which is grab her and kiss her long and hard. I would have done the same: That speech was HOT.

And so Deke and Rayna have sex on the floor of the house he bought for them way back, then they hold hands and go home to tell Daphne and Maddie that they’re back together… and that Deacon has cancer. By the end of the episode, everyone’s crying and hugging and all I can think is thank GOD Deke’s resolve crumbled like a stale blondie when faced with the warm glow of Rayna’s steadfast love.